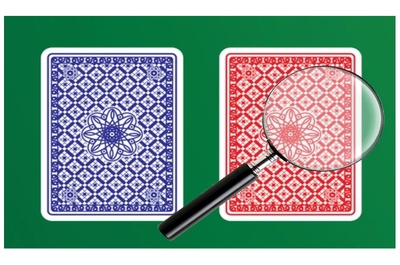 Baccarat, or more specifically one particular variety of it, chemin de fer, is traditionally the preferred casino game of choice of none other than 007, James Bond. Whilst many modern casino fans, most of whom typically play online, may not bother with baccarat in any form, it retains a certain old school glamour. When played at an online casino, the game is useful for its simplicity and very low house edge (the casino’s advantage over the player) but, of course, you won’t see Bond sitting at home on his laptop playing a few hands.

The fictional English spy is typically shown playing this casino classic in Monte Carlo or some other glamorous physical casino, and being Bond, he more or less always wins – but baccarat is actually one game where you don’t need to be a quasi-superhero to win.

Edge sorting is a technique that can be used in baccarat and, in theory, other card games as well, to enable the player to overturn the casino’s advantage and give the player the theoretical edge – pun intended! In this feature, we will explain briefly how edge sorting works, whether or not it is legal, and we’ll also take a look at one huge story concerning its use in some eight-figure casino wins.

What Is Edge Sorting? 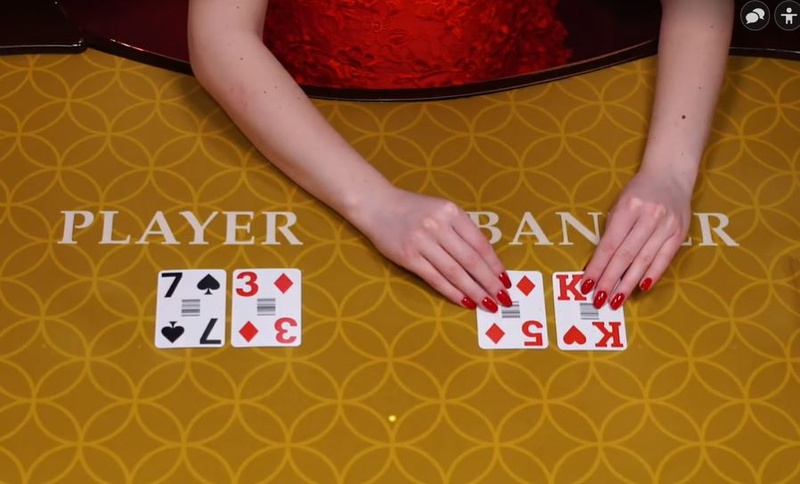 For the purposes of explaining what edge sorting is, we will assume that the reader knows how the game of baccarat works. The key point with regards to the rules is that, as with blackjack, there is a distinction between how high and low cards affect gameplay and the likelihood that either the player or the house will win.

The differences are so slight that it is not possible for a player to memorise every card in multiple decks. Moreover, due to the importance of high cards within the game, it is not necessary. If the player can simply identify high cards then this is enough. To this end, a player will seek to ensure that the dealer will turn the high cards around, through 180 degrees.

This is the “sorting” aspect, with the “edge”, of course, coming from the fact that the differences are noted at the edges of the cards. If all the high cards are turned through 180 degrees, it becomes easy for an expert to differentiate them from other cards and this gives them a sizeable advantage over the casino, reversing the house edge and making the game profitable for them.

Of course, noting these tiny differences in the cards without arousing suspicion and simultaneously playing the game perfectly is no mean feat. And, of course, there is the not insignificant issue of getting the dealer to rotate the cards that you want.

Rotating The Cards To Sort The Edges 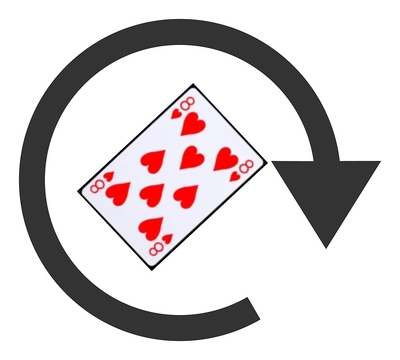 Edge sorting is not viable unless the player can persuade, encourage or, some would say, trick, the dealer into turning the cards. This is also possible if the dealer is in on the “scam” but typically players will create some sort of story or superstition that means an amenable dealer, unfamiliar with edge sorting, does it while being unaware of the assistance they are providing.

One angle a player might take is to claim it is lucky (or unlucky) for the dealer to turn (or not turn) a certain card. Usually, the player will play for smaller stakes over a sustained period until the deck has been sufficiently altered (enough cards have been rotated) that the advantage now lies with them and not the house. At this stage, they may raise their stakes.

As with card counting in blackjack, such an obvious ploy tends to arouse suspicion though, especially if the player suddenly starts winning a lot of hands with the newly raised stake. For this reason, more sophisticated techniques may be used, such as a player surreptitiously calling an accomplice to the table when the deck is ready. The new player can then simply start betting big from the off, arousing less suspicion from the casino than a player who drastically alters their stake.

That said, due to the low house edge the casino holds in baccarat, some players using edge sorting may simply accept the hit on the hands they play whilst they are working through the deck. They may win a little, or a lot, or may lose a little, or a lot, but on average, playing often enough, their losses will be small. And crucially, they will be more than compensated for by the big wins that come when the edge sorting is complete.

One might assume that the casinos would instruct their staff not to rotate their cards but in general the house does not like to admit, or make public, the truth that there are ways (such as card counting in blackjack or spotting wheel bias in roulette) that it can be consistently beaten. Of course, some dealers may be aware of it and could politely refuse to rotate the cards, but in this instance those seeking to exploit the technique of edge sorting will simply try another table or another casino.

Edge sorting relies on the cards that have been rotated remaining that way. It is only efficient once a certain proportion of the cards have been turned and can thus be identified as either high or low. Automatic shuffling machines which many casinos now use do not rotate the cards so these are safe for players using edge sorting (though of course the dealer can rotate them as they move them into the machine). On the other hand, if the dealer manually shuffles the deck, depending on how they do it, the cards may end up being rotated back again.

It is essential for anyone seeking to edge sort that the cards remain orientated the way they have arranged them. Edge sorting cannot be used once a sorted deck becomes unsorted because the player won’t be able to recognise high cards anymore before they are turned over.

Is Edge Sorting In Baccarat Legal? 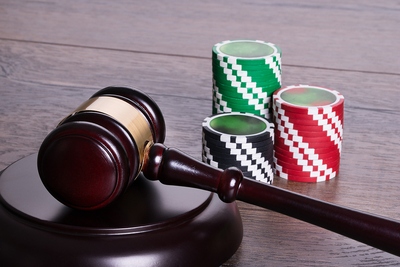 There are some techniques used to win in casinos that are categorically illegal, such as, unsurprisingly, bribing the staff or placing late bets (for example in roulette, after the ball has begun to settle). Others tend to be in more of a grey area, with things like card counting being legal but against the casino rules; so while you won’t get into legal trouble for it the casinos certainly take a very dim view and are within their rights to ask anyone they suspect of counting cards to leave.

When it comes to edge sorting, it is probably accurate to say that it is a far darker shade of grey than counting cards. You are unlikely to be prosecuted for edge sorting at a casino’s baccarat table but it is certainly going to get you kicked out if you are found out. Whether it is outright illegal is perhaps moot though, because as we have seen from some huge legal cases, the authorities have tended to favour the casinos when matters have come to court. Illegal or not, those trying to get the better of the house have been forced to repay any winnings and ultimately, to both parties, that is probably all that matters.

Perhaps the two biggest and most famous edge sorting wins-that-weren’t have both involved Phil Ivey. Ivey is well known to most fans of gambling and in particular those who love the game of poker. The “Tiger Woods of Poker” has an impressive 10 World Series of Poker bracelets to his name but the Vegas resident certainly does not limit his gambling to that game alone.

Back in 2012 the California native, along with a playing partner, hit the Borgata Casino in Atlantic City for a very cool sum, believed to be just under $10m. He did this not by playing poker or blackjack but by playing baccarat, along with the “Baccarat Machine”, Cheung Yin Sun, his female accomplice.

In 2014 the casino filed a lawsuit against Ivey and so began a very lengthy series of legal hearings and rulings that saw the authorities side with the casino. In 2016 a Federal judge ordered Ivey to repay an eight-figure sum (around $9.6m that was won at baccarat and a further half a million won at other games with those winnings).

According to the reports, Judge Noel Hillman ruled that the cunning duo “did not commit fraud, (but) they did breach their contract with the casino and were liable for damages.” New Jersey casino regulations prohibited the marking of cards in the casino. Whilst they had not actually done this, the judge ruled that by having the cards rotated and noting the imperfections they had essentially contravened the same rules.

This was far from the end of the matter though and clearly Ivey was not keen to pay up. Using legal proceedings and obfuscation, the poker ace managed to avoid repaying the Borgata for a number of years. Exactly how much has been returned to the casino remains unclear but in 2020 he and his playing partner were believed to have come to an agreement to stump up most of the cash. 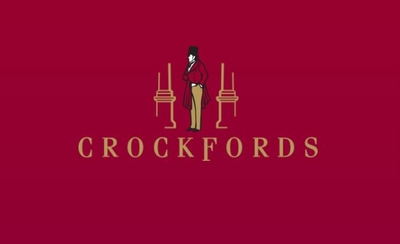 2012 was some year for Ivey as, after his monster win at the Borgata, he took Mayfair (London) venue Crockfords Club for a very similar sum. Playing Punto Banco and again employing edge sorting to gain the upper hand, Ivey went on a serious winning run. However, realising what had happened, the casino were not exactly forthcoming with his winnings.

They returned his estimated stake of £1m but withheld winnings of around £6.7m, saying they would forward those in the near future. Perhaps unsurprisingly, they changed their mind and it was then the American poker ace who was doing the suing and instigating court proceedings. Two courts, first the High Court, then the UK Supreme Court, found in favour of the Crockfords Club and so at the time of writing Ivey has not received his huge winnings and seems highly unlikely to do so.

It was largely accepted that Ivey did not believe he was cheating per se but rather taking advantage of a casino weakness that they themselves could very easily, and should, have rectified. For the purposes of civil law he was deemed to have cheated. However, interestingly, part of the court’s rulings, as stated by Lady Justice Arden, hinged on the fact that there is provision in the Gambling Act of 2005 for a party to cheat “without dishonesty or intention to deceive: depending on the circumstances it may be enough that he simply interferes with the process of the game”.

Edge sorting is a technique that can be used to give the player the upper hand when it comes to baccarat and variations of that game. It uses tiny differences between cards and manipulation of the dealer to overcome the inbuilt house edge of the game. It takes skill, experience and practice, plus finding the right casino and dealer(s). If you can get away with it without being caught, you could, in theory, make huge sums of cash.

However, casinos, their security and dealers are increasingly aware of the various advantage techniques used by cunning gamblers. If you do get caught there is a very strong legal precedent in both UK and US courts that you will have to repay any winnings, rendering the whole exercise rather pointless. It would seem that edge sorting may have had its day but, of course, the players who do not get caught don’t make the news, so who knows?