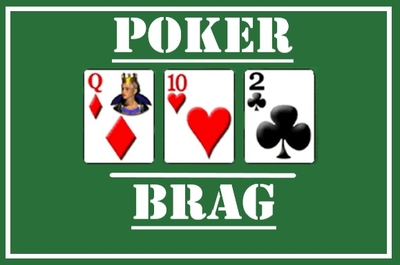 The three card variants of poker and brag have many similarities, as you might guess given players receive the same number of cards. They are not identical though and it can be easy to mix them up if you are not careful. So, if you want to know how these popular card games differ, simply carry on reading as we give you a comprehensive overview of the pair.

Three card poker was first patented in 1997 and since then it has established itself as a popular addition at many casinos, particularly in the United States. It is here where the game is played although you can easily find options at online casinos too, both in non-live and live form. In many ways, it is viewed as a modernised and casino-adapted version of the much older three card brag.

Although similar in nature, three card brag began as a game played with a group of friends, outside of a casino environment. In its most pure form, it is not a game that requires a ‘house’ as such, only a temporary dealer, a role that is passed on with each round. It has deep roots in British gambling culture, having had its rules published in 1721 in the Compleat Gamester. Very similar games do predate brag it by a couple of centuries, such as Post and Pair, but none works in precisely the same manner.

The early form of brag, known as classic brag, is something you will very rarely find played today though. Instead, what you will find is a version technically called ‘modern brag’ although you will not see the name ‘modern’ in everyday usage, as it has simply become ‘brag’. It is a game you can find in casinos, although this form of brag is substantially different and more closely resembles three-card poker.

Three Card Brag With Other Players 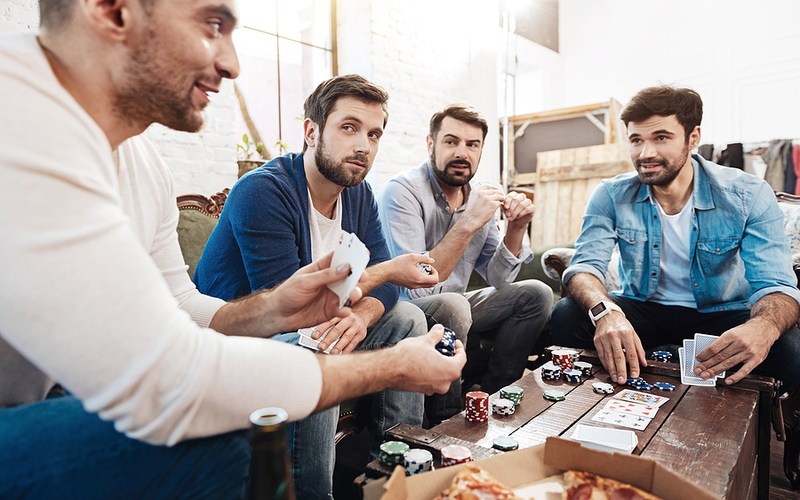 It is possible to play three card brag against a designated dealer at a casino or it can be simply played among a group of friends. In the case of the latter, the game requires just two participants but really four to six is optimal for entertainment purposes. Both variants have the same initial premise in that everyone puts in some money and then three cards are dealt to each player. At a casino you will bet money via chips but when playing with friends you do have the option of using actual cash instead.

No matter whether you opt for chips or money though, the betting works differently in your more traditional modern brag game. If Player A was due to bet first, and they put in £2, it would then move on to the next player to see if they would like to bet or fold. If player B folds but player C and D both call the £2 bet, then the betting will work back to Player A. In many poker games, betting would stop once the final player has called the bet but in three card brag, it only stops when there are two players remaining. If nobody wishes to match Player A’s initial bet and everyone decides to fold, Player A will collect the ante present in the pot.

When enough players fold so there are only two remaining, the betting continues. At this stage though, either player can double the previous bet amount (in our example this would mean £4) and ask to see the other player’s cards. This puts an end to the betting as the person subject to the request must reveal their cards. Should their hand be superior to that of the other player, the other player will fold. If not though, the other hand will be revealed. As standard for a poker game, whoever wins the round takes all the money in the pot. In the event that both players have hands of equal value, the player who asked for the cards to be shown will lose.

There is a decent tempo to this form of three card brag due to the limited time spent shuffling. Folded hands are simply placed to the back of the single deck of cards. A shuffle usually only takes place when a player wins a hand with a three-of-a-kind, and this is not something that happens too often. You could do it more often of course but standard brag rules do not dictate this. What players do need to decide pre-game though is what the minimum and maximum bets are.

There is no ‘house’ in this form of brag as players are winning money from one another. The dealer chip is simply passed on after every round so every player gets an equal opportunity to lead the betting. Casino brag however is much closer to three-card poker than this and rather than facing other people, you end up trying to bet the house instead.

The non-casino version of brag also facilitates ‘blind’ betting. If a player would rather play without looking at their cards, all their stakes are worth double, meaning they only have to bet half as much to call a bet. Should they wish to look at their cards at any point, the player is welcome to but they must then play by the normal betting rules. Some casinos will allow you to bet in such a way but most will not and the RTP (return to player) percentage when betting blind tends to be poor.

With brag at a casino, the game has a couple of major differences. One is that there is no the potential for several rounds of betting, only the one. Second is that you do not collect the money on the table following a winning hand. Either your winnings will simply be equal to the money or you will receive a larger payout should you have a particularly rare hand e.g. three of a kind or a straight flush.

As this version of three-card brag, so closely matches three-card poker, we will take you through how both games work in the same section. 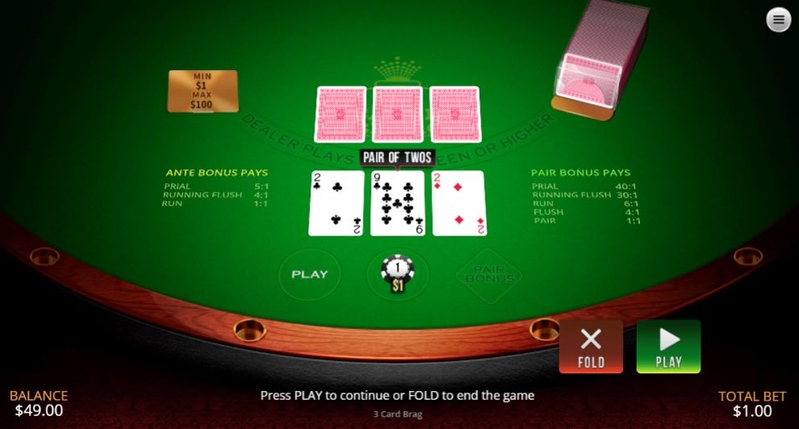 At the start of every round, in order to take part, players will need to place their chip(s) on the ‘ante’ and/or ‘pair plus’ space on the table. This can be any amount the player decides providing it falls between the lower and maximum limit set by the casino. As you will not be playing against other players on the table, what they decide to bet is irrelevant to you.

An ante bet is simply a bet that your hand will beat the hand of the dealer. With a pair plus bet, however, the objective is to make a hand of a pair of better with your cards. Here you will not be competing against the dealer in any capacity. Simply put, if you hit any pair of better your bet will win but end up with a high card and you will lose. Some casinos may require you to place an ante bet, with the pair plus optional, but often you have the choice of either or both.

Once bets have been placed it is time to deal the cards, which will be dealt face down. Players will look at their cards at this stage and then decide if they wish to play or fold. Should they wish to ‘play’ they must make a bet equal to that of their ante. By folding, players are forfeiting their ante to the house. Once all players on the table have decided, the dealer will then turn over their hand. The dealer must have at least a queen high or better to ‘qualify’. Should this not happen then players are paid out 1:1 on their ante bet while play bets are simply voided and the stake returned. 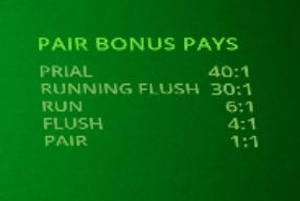 This covers the fundamental rules of three card brag/poker at a casino. It is worth noting though that you can win more than a 1:1 payout as many casinos will offer enhanced payouts on rare hands. This tends to apply to both ante bets and pair plus bets.

For an ante bonus, the extra amount can be worth between 2:1 and 4:1 for a three-of-a-kind and between 3:1 and 5:1 for a straight flush. So, if your ante bet was £5 and you ended up with a straight flush, your bonus could be worth as much as £25. One thing to note is that you will be paid this out even if your hand ends up losing to the dealer.

For a pair plus bonus, a flush is typically paid out at 3:1, straight 6:1, three-of-a-kind 30:1 and a straight flush 40:1. Part of the reason for these enhanced bonus rates is that casinos enjoyed a larger house edge with pair plus bets, typically 7.28%. As such, they can afford to pay out this extra amount on the rare times a player does scoop a large bonus. 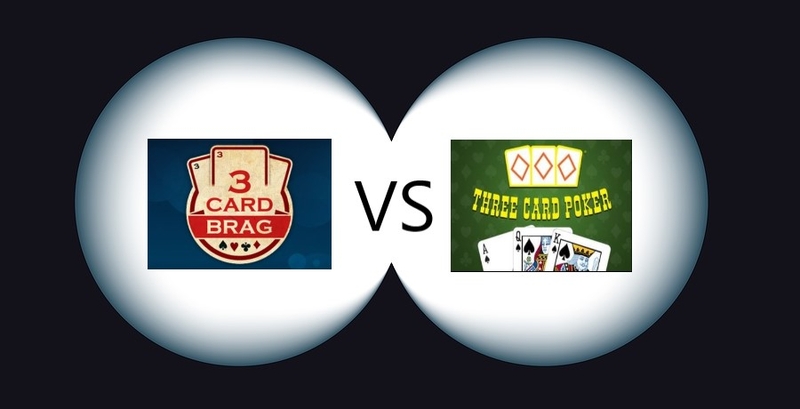 Whether you are playing three card brag or poker at a casino, there will be very few ways in which they differ. One major difference though is that hands are not ranked in exactly the same way. Below, is the ordering for three card poker, which ranks hands from the best to the worst directly in line with how rare they are.

For anyone that has played other poker variations, such as Texas Hold ‘em, you will have spotted some changes such as a straight beating a flush, and three-of-a-kind beating both.

With brag, the most valuable hand is three of a kind, rather than a straight flush, despite being very slightly more common.

Notice that when playing brag, you may see the word ‘prial’ instead of three-of-a-kind. The term itself is short for a pair royal and is just another way of describing three cards with the same value. This is one main difference of brag and another is that rankings within each hand do not always follow the standard convention.

One exception is that the best prial is a trio of threes, then followed by aces and kings, etc. Additionally, the optimal straight flush is ace-two-three as opposed to ace-king-queen. In all other cases though, the higher the card/pair/flush, and so on, the better than hand.