Wherever sport is played, the level of intense competition – be that individual versus individual, or team versus team – always lends itself to the possibility that tempers may fray in the heat of battle. On the domestic scene, the Premier League is certainly no stranger to unsavoury instances; from running touchline battles between the coaches to combative incidents in the tunnel, and even player versus fan Kung-Fu confrontations ….we are looking at you, Eric Cantona.

Turning our attention stateside, it is no surprise to find that US sport has also been the scene of some pretty spectacular scraps over the years. The sheer physicality of the NFL of course lends itself to testosterone-fuelled boil-overs, whilst a gloves-off punch-up seems to be a standard part of the entertainment in the rough and tumble of the NHL. Basketball also isn’t immune but, perhaps surprisingly, the stage for some of the most over-the-top blow-ups over the years has been the seemingly civilised setting of the baseball field.

Baseball is a game that, in comparison with its US counterparts, demands very limited physical contact between the players. The site of two teams of men lining up in uniforms resembling pyjamas if anything instils a sense of calm in the viewer. What could possibly go wrong?

Quite a lot it seems, as lurking just beneath the world of spittoons and signal calling, lies a level of rage and frustration waiting to be unleashed that is rarely seen in other sports. In fairness to the players and coaches involved, baseball’s protagonists do manage to keep a lid on the building tension the vast majority of the time. Whilst verbal sparring is a frequent occurrence, actual physical confrontations only tend to crop up a few times a year at most – which isn’t bad going considering the Major League Baseball season consists of 2,340 games, plus the postseason. That said, when it does kick off in baseball, it REALLY kicks off.

Here we take a look at a selection of the headline-grabbing instances across the last 60 years or so, including a look at the 2022 Angels versus Mariners pile-on which thrust baseball’s tendency towards violence back into the public spotlight.

Our first entry into the baseball hall of shame occurred at Candlestick Park back in 1965 as tempers flared in a clash between the LA Dodgers and San Francisco Giants.

Whether through accident or by design, Giants pitcher Juan Marichal set the wheels in motion when striking two Dodgers batsmen with errant throws. Dodgers pitcher Sandy Koufax gallantly resisted the urge to retaliate, even when Marichal stepped up to bat. LA catcher Johnny Roseboro however seemingly had other ideas, with one of his return balls to his pitcher clipping the ear of Marichal. Seemingly not blessed with the calmest of natures, Marichal escalated the ensuing argument by taking his bat to the head of Roseboro, inciting a mass brawl.

Despite leaving the field drenched in blood as a result of Marichal’s actions, Roseboro and his attacker would become good friends, with Marichal later speaking at the funeral of Roseboro in 2002.

Fast forward to 1973, and our next instalment occurred not on the mound, but rather at second base in a clash between the Cincinnati Reds and New York Mets.

Reds baseman Buddy Harrelson not taking kindly to the manner in which Pete Rose slid in to try and avoid the out, and immediately made his frustrations known.

A two-man scuffle quickly escalated into a bench-clearing brawl which continued even after a slightly dishevelled Rose had been extracted from the mass of bodies.

Possibly the most epic brawl in the history of the game came at the home of the Atlanta Braves in 1984.

An ill-tempered affair almost from the off, Game One of the series had ended amidst a cloud of verbal sparring. Game Two on 12th August, then saw events take a turn towards the physical… and in spectacular style. Beer swilling, 13 player ejections, both managers ejected, four bench clearing brawls, fans being led away from the melee in handcuffs… this one had it all.

On something of a knife-edge from the moment Pasqual Pérez fired a ball straight at Alan Wiggins with the very first pitch of the game, it was in the eighth inning that all hell broke loose.

Setting the standard by which all future brawls would be measured, Braves manager Joe Torre lay much of the blame at the door of Padres boss Dick Williams, whom he likened to non-other than Adolf Hitler in the aftermath.

The first of a double bill of brawls from 1993 occurred at Camden Yards, as the Baltimore Orioles played host to the Seattle Mariners.

The catalyst for this throw down once again proved to be events on the mound, as a combination of frustration on the part of the Mariners – who were well behind in the game – and errant pitches by both sides finally came to a head.

It can’t be too much fun being struck close to the elbow by a baseball travelling at around 90mph.

Robin Ventura of the Chicago White Sox certainly didn’t seem to enjoy the experience when struck by 46 year old Texas Rangers pitcher Nolan Ryan in 1993 – maintaining his cool for approximately half a second before dispensing with his bat and charging the mound.

Top marks to the veteran for a good headlock adjustment to greet the onrushing batsman, who was twenty years his junior.

Ventura was ejected for his part in proceedings, whilst Ryan stayed in the game, much to the fury of the White Sox coaching staff.

A second entry for the Baltimore Orioles on the list, with the blame this time lying squarely at the feet of pitcher Armando Benitez.

In the midst of a sticky patch during his career, Benitez had given up a home run in the previous inning and expressed his frustrations by launching a fastball into the back of the unfortunate Tino Martinez – sparking the fury of the New York Yankees who stormed the pitch.

Initially seeming set to cool down after something of a mass stare down, the confrontation eventually escalated into a full-scale melee which spilt over into the dugout.

Perhaps there is something in the name Martinez; 2003’s brawling instalment triggered by Boston Red Sox pitcher Pedro Martinez clunking Karim Garcia in the back with a fastball.

Garcia took it well, but things were still simmering by the time the Red Sox were next to bat, Manny Ramirez blowing his top at a relatively innocuous-looking pitch from Roger Clemens, sparking a heated verbal exchange between Martinez and the Yankees bench coach – 72 year old Ron Zimmer.

Showing that you are never too old to see red, Zimmer charged Martinez, with the predictable mismatch resulting in the septuagenarian being faceplanted into the turf.

Zimmer no doubt quickly regretted losing his cool, whilst Martinez received a $50,000 fine for his actions.

Baseball stars don’t come too much bigger than Alex Rodriguez of the New York Yankees, and it was he who was at the centre of another Yankees vs Red Sox clash.

Reacting relatively well to being drilled in the elbow by Bronson Arroyo, A-Rod threw some verbals in the direction of the pitcher but steered clear of storming the mound.

And that may well have been that, but for the interventions of Red Sox catcher Jason Varitek who stepped in to defend his pitcher, sparking a now familiar multi-man pile-on between two of the biggest sides, and featuring a handful of the most famous players in the game.

2013 then demonstrated that baseball beatdowns weren’t only restricted to Major League franchises, as Canada and Mexico squared off in the World Baseball Classic.

Down 9-3 in the ninth and in a pretty hopeless position, Mexico seemed to decide that if they couldn’t beat Canada, they would at least inflict some damage on the opposition before the day was out.

Mexico’s third baseman Luis Cruz gave the signal that pitcher Arnold León should hit the next batsman. It took him three – not very well disguised – attempts but León did get the job done, planting the ball into the back of Rene Tasoni, with predictable results.

Featuring takedowns and sleeper holds straight out of the WWE, there was certainly no love lost between these two in what is traditionally one of North America’s friendlier rivalries.

Last but not least comes the 20+ man brawl from Angel Stadium in August 2022.

In the midst of a multi-game series which had already featured more than its fair share of inside pitches, things finally boiled over when Jesse Winker of Seattle was struck by the errant pitch of Andrew Wantz. Rather than venting his anger at Wantz, Winker took the ill-advised approach of attempting to single-handedly take on the entire Angels bench.

Not to leave their man on his own, the Mariners bench sprung into action and bedlam ensued. Featuring the usual array of grappling and haymakers, mixed in with Winker throwing abuse at the home crowd, this was a scrap of epic proportions. Raisel Iglesias – who had already attempted to dismantle his own dugout area – provided a fittingly chaotic finale when launching a sesame seed and gum-laden package towards the mound.

Eight ejections later, including three players from each side, and both managers, the game finally continued following an eighteen-minute delay. 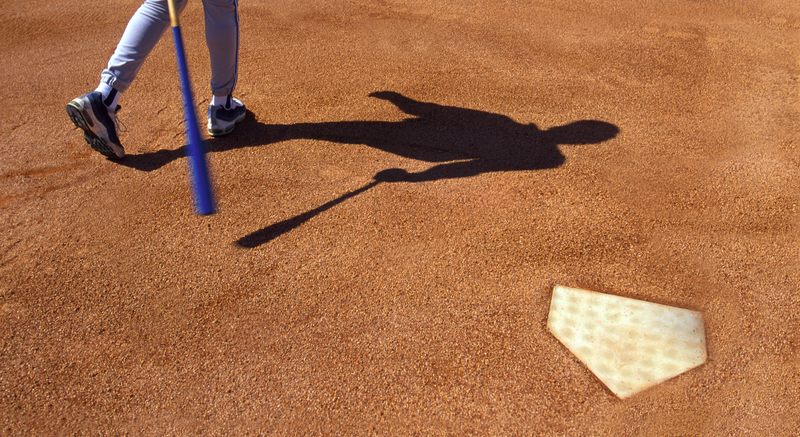 As we can see, brawling, whilst being rare, undoubtedly does exist in baseball. And when it does happen it tends to involve far more players than in other sports. Part of that mass participation is due to the way in which a baseball game is structured. No matter when a brawl breaks out the player on the offensive side will always find themselves outnumbered on the field, with the possibility of nine defensive players descending upon them – cue the bench evacuations, which are effectively the quickest way of evening out the numbers. This wholescale participation does however create something of a problem when handing out punishments to those involved. The umpires can’t simply eject everyone from the game after all.

As such the baseball penalty system surrounding fights tends to be a little more lenient than in some other sports. In most instances, the instigators of the fight will be ejected from the game, be that the pitcher for striking the batsman, the batsman for charging the mound, or both. Should the pitcher be thrown out, the pitching coach will usually follow, whilst anyone who lays hands on an umpire during the skirmish, or is deemed to have overstepped the mark in terms of striking the opponent, inciting the crowd, or otherwise, is also likely to find themselves out of the game. The game-day decisions will always rest with the umpiring team.

Any further sanctions after the event are determined by Major League Baseball’s Commissioner and will be assessed on a case-to-case basis. Anyone ejected from the game will almost certainly face a suspension of some description. Pitchers – who only tend to play once per week – will often be given a six-day ban to ensure they miss at least one start, whilst other players can expect an enforced break of between five and eight days. Any further sanctions will then likely come in the form of fines, although given the vast salaries of MLB players, these tend to provide less of a deterrent than the bans, particularly during the more crucial stages of the season.