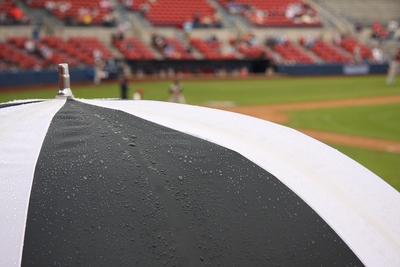 Depending on the sport, rain can be anything from largely irrelevant to extremely problematic.

In games such as football and rugby, rain can come and go as it pleases.

Only in truly exceptional cases will it lead to a game being suspended or cancelled.

At the other end of the scale, you have sports like tennis or cricket where even a light drizzle may well mean a halt to proceedings.

Baseball falls somewhere in the middle of these two extremes with some rain tolerated but heavier rains resulting in disrupted play.

Within Major League Baseball (MLB), the general rule is that teams will continue playing if the rain is light to moderate but in heavy rain, or if puddles of water begin to form, then play will be suspended.

If heavy rain appears at the ball game, it would be unreasonable for players to immediately take their stuff and all go home given it might just be a passing shower. At the same time though, players cannot be expected to sit around for hours on end hoping that blue skies emerge. So what do the rules actually state? If it is raining pre-game then the manager of the home team (unless it is the second game of a doubleheader) will decide whether the game should be delayed or cancelled.

If and when the manager decides all is good, play can take place but before this can happen, they must follow the usual practice of handing the line-up card to the umpire. It is at this point that the responsibility for any cancellations or delays changes hands, going from the manager to the umpiring crew chief.

The MLB rulebook states umpires must wait at least 75 minutes to see if conditions improve before cancelling the game. If there is hope of conditions improving, umpires will generally be happy to wait much longer than this. Rescheduling games is not a major problem but with such a busy season (162 games plus post-season!), the general principle is to try and finish matches on the day if possible. In some cases, MLB umpires will wait up to three hours before calling a rainout for this reason.

There was even one instance in 1990, which saw a 7 hour and 23 minute delay, the longest in baseball history. Sadly, all that time waiting around turned out to be for nothing too, as the game ended up being postponed anyway. 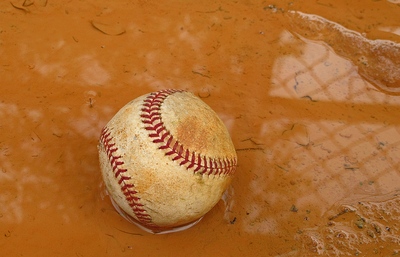 If the game has gone further than the top half of the fifth inning and the home team is winning, this is enough for an official game. In such cases, the home team would simply be declared the winner if the rain delay turns into a cancellation.

If the game has completed the bottom half of the fifth inning, this can be deemed official too if either team is ahead. There is a caveat to this though, this being that if the visiting team scored one or more runs to take the lead, during the inning that was halted prematurely, and the home team has not retaken the lead, this is not an official match. In the case of a match not being ruled as official, it will need to be finished at a later date.

In the event that both teams are tied and at least five innings have been played, the game will be considered suspended and no team will be declared the winner. Games will also be suspended if there have been fewer than five full innings played. Following a rule change in 2020, rather than starting from scratch, suspended matches will now resume from the point they were stopped, with the scoreline how it was. This is something of a fairer system as a team that was well up after three or four innings now preserves their lead when heading into the rescheduled game.

A small point to note here is that when a baseball game suffers a rain delay, the game clock stops. As such it will not be counted as part of the game length noted in the box score. This means that the official timings for baseball matches always reflect the time the game was ‘active’ and long-matches are not simply a result of weather-related disturbances.

Other Reasons for Delays or Cancellations 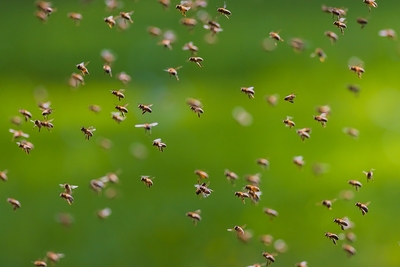 If a baseball match has to be suspended, or delayed, it is likely because of rain but this is not the only weather-related factor that can cause such an issue. Stormy or snowy weather for instance can also do the job; basically any sort of weather condition in which it would be deemed unsafe to play can lead to delays.

That said, when it comes to extreme heat, this is something not taken as seriously as a health risk and matches do take place in spite of very high temperatures. In theory a match could be delayed due to heat (and some teams schedule evening games in the summer to avoid potential issues) but this never seems to happen.

In the past the Texas Rangers, for example, have played in 42.8 degree heat (109 Fahrenheit) although this is an issue of the past for them now. These days, the Rangers play inside the Globe Life Field with its closed roof and air conditioning, making things far more comfortable for both players and fans.

There can even be lengthy stoppages in play for reasons outside the weather, such as a swarm of bees. It may sound silly but an Astros vs Padres game in 2009 was delayed by nearly an hour due to a couple of thousand bees making their presence felt inside the stadium!

How Often Are Games Cancelled Due to Weather? 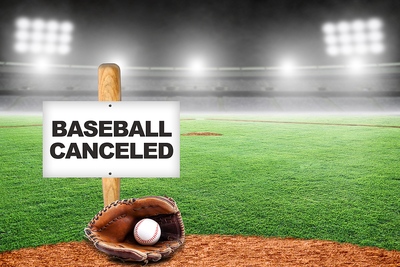 This was a particularly wet campaign, so it resulted in the joint-second most cancellations since MLB began tracking such figures back in 1986.

Given that there are a massive 2,430 matches in the regular MLB season, this is still a very low proportion of games sabotaged by the rain mind you.

Although 2018 was something of an outlier at the time, it is a fair assumption to think that the changing climate will make weather issues a far more regular occurrence moving forward.

This is of course, providing that the majority of baseball parks remain outdoors and do not opt for a weather-resistant indoor venue.