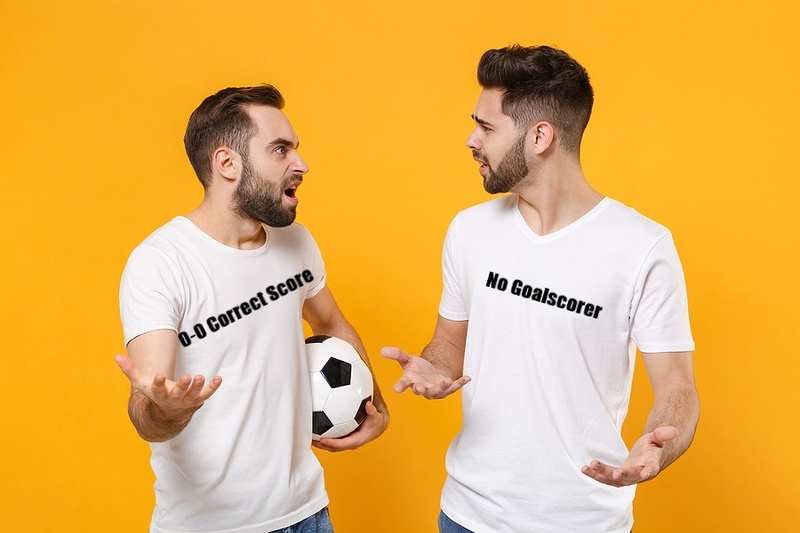 Correct score betting is one of the most popular markets around when it comes to football, especially for punters looking for a big win from a small stake. Even the most likely score is usually priced at around 5/1 or 6/1, whilst if you are feeling bold, wilder bets often land at odds of 25/1, 33/1 and even higher.

One score that people don’t tend to back all that often is 0-0. This is partly because if you are watching the game there is something unpleasant, almost unnatural, about wanting neither team to score, essentially cheering on the prospect of nothing happening. But it is also because 0-0s are, of course, relatively rare, occurring only around 8% of the time in general.

However, since the bore draw does happen, backing 0-0 is surely the right thing to do sometimes… or is it? Well, based on our 8% stat above, 0-0 should happen once every 12.5 games. Some of the time it will win and, what’s more, some of the time it will be a good value bet. In addition to that, if you intend to watch a game for a bit of fun then backing 0-0 might be a sensible way to hedge your bets – at least if it does end up being a bore draw you’ll land a tidy win, typically at odds around 10/1. But is there a better way to do things, even if you don’t think there will be any goals and want to back the 0-0 stalemate?

No Goalscorer May Be The Shrewd Move

If you think a game is going to end without a goal, or simply want to make sure that if you sit through a 90 minute snooze-fest you at least make a few quid from it, it is always worth checking out the odds on No Goalscorer.

You can find this market in a variety of ways and whether you back it under First Goalscorer, Last Goalscorer or even Anytime Goalscorer, it amounts to the same thing. If there is no goalscorer bet and the game ends 0-0 you win your bet. Most bookies do not actually offer it under the Anytime market, although Ladbrokes, Coral and BetVictor typically do. The odds for first and last scorer are almost always the same as each other, certainly when it comes to backing no scorer, whilst this selection will usually also be priced at the same level in the anytime option.

The huge advantage of backing No Goalscorer, let’s say in the First Goalscorer market (in general we would say FGS is the best option though it doesn’t really matter) is that in goalscorer markets, own goals do not count.

Of course, in correct score betting own goals do count, so if you back 0-0 and the game ends 1-0 it doesn’t matter if that was an own goal, a 60 yard volley, or a tap-in in the fifth minute of added on time: the match did not end 0-0, therefore your bet did not win.

In contrast, when it comes to First Goalscorer betting, own goals are simply disregarded. For the sake of the settlement of that market it is as if they never happened, meaning that a game that ends 5-4 can still (in theory!) be a winner for No Goalscorer if, and we admit this is a big if, all nine goals were OGs. That said, there was once a game that ended 149-0, with all 149 goals being own goals! In case you hadn’t guessed, that was a game thrown by SO l’Emyrne who deliberately scored almost 150 OGs in protest!

The more realistic scenario is that the game ends 1-0 thanks to an unfortunate own goal. If you backed 0-0, you lose, but if you backed No Goalscorer, you win. Games with more than one non-deliberate own goals are very uncommon, although there was a famous match between Inter and Catania that saw four own goals once.

You might think it very rare for the only goals in a clash to be own goals but matches have ended 1-0, 1-1 and 2-0 without any “legitimate” strikes scored by the attacking side. No matter how rare it may be, it still makes sense to back No Goalscorer rather than 0-0. Even if the strange circumstances happen once every thousand games you will still be landing a winning bet that would otherwise be a loser.

Are The Odds on 0-0 and No Goalscorer The Same? 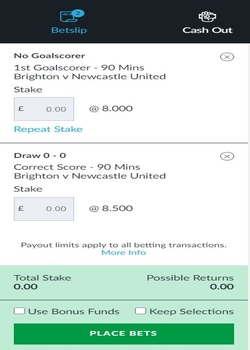 The majority of the time at most bookies you will find that these markets are priced at the same odds more or less. So if you can back a 0-0 correct score at 8.0, No Goalscorer in the FGS (or LGS, or sometimes Anytime) will also be 8.0 or thereabouts. This isn’t always the case though, so it is worth checking.

Somewhat surprisingly, in the course of researching this piece we have seen that some sites will actually offer higher odds for No Goalscorer from time to time. For example, on the 7th July 2020, Watford hosted Norwich in a Premier League clash. The odds on 0-0 ranged from a rather poor 27/4 up to a much fairer 9/1, with most firms offering between 17/2 and 9/1.

When we looked at backing nobody to score as the first goalscorer it was a similar picture, although Betfred had the highest odds at 10/1. Interestingly Betfred priced 0-0 at 17/2, so whilst the shrewd punter could get 10/1 and the advantage of own goals not counting, a less savvy bettor would only get 17/2 (or 9/1 if they shopped around) and also risk losing their bet if an OG was the only goal of the match.

As said, the odds are often (but not always) the same, but surprisingly you may even find better odds in the FGS market. The moral of the story is simple: if you fancy a game to finish 0-0 then check the prices for 0-0 and also for No Goalscorer; if the latter is the same or better it will almost certainly be the best option. If the odds are better for 0-0 you might decide to back that outcome… just hope and pray the game isn’t decided by an own goal if you do.

Anything Else To Look Out For?

Above we stated that where the odds are equal or better backing no scorer will “almost certainly” be the best option. The reason we insert that caveat is that from time to time some bookies may have offers that have a bearing on these markets. This could be an insurance deal, a money back offer, a free bet or something else.

Whatever the promotion, if only certain markets are eligible, this could mean that backing the correct score option is the wiser choice. For example if a site is offering money back on losing Correct Score bets if there is a penalty in the game, you might decide there is more value that way.

The only other thing to be aware of is that whilst all major bookies do not list Own Goal as an option in their First/Last/Anytime Goalscorer markets at the time of writing, this could change. What’s more, smaller or newer sites may list an OG as a backable option. If this is the case then backing No Goalscorer would be a losing bet and the advantage we have discussed would no longer be relevant.