In many timed limited sports across the world, the game clock stops when there is a stoppage in play. You will see this in the likes of basketball, ice hockey and even in rugby, although for this bruising sport not all stoppages are included. Football operates rather different though, as for the beautiful game the clock runs down continuously, without any pause, from the moment each half begins.

As breaks in play do occur in football, whether it be a player receiving medical treatment or during a substitution, this means that a sizeable chunk of a 45-minute half can be eaten into. To claw some of this lost time back, referees will add what is known as injury time onto the end of each half, allowing the game to continue for a little longer. Here we will discuss the pros and cons of the injury time system and how it can impact people placing bets on football.

Before we assess the strengths and limitations of injury time in football, let us first provide you with a more detailed explanation of how it works. Although it is frequently called ‘injury’ time, it is not necessarily linked to any injuries. A player suffering an injury is only one of the many reasons why a game might need to be briefly halted but other reasons include items being thrown onto the pitch, substitutions being made, a pitch invader, a VAR check, a drinks break, players fighting or a team celebrating a goal, among various other possibilities.

Another thing that a referee will take into account is if any time-wasting has occurred. If a team that is narrowly winning begins taking an age with every throw-in, goal kick and corner, the wasted time can form part of the allocated injury time. A reasonably quickly taken throw or corner, however, would not be considered. Ultimately, it is entirely down to the referee’s discretion how much time is added on at the end of each half. At this point, we should note that injury time goes by several other names including stoppage time, additional time and extra time (not the same extra time as the 30 minutes added onto some knockout tournament matches).

As a rule of thumb, 30 seconds is added for every substitution and for each goal but there are no strict times set out as discretion is king. Whatever the referee decides they want to add on, they will make the fourth official aware just before the end of the half. During the final minute of the half, the fourth official will raise their electronic board to show the referee’s decision to the crowd.

The number of additional minutes indicated by the referee should always be a minimum, not a maximum. Indeed, the FA explicitly states this is the case saying “the additional time may be increased by the referee but not reduced.” Despite this, it is not unusual to see that whistle blown several seconds before the allocated time, especially in games where one team is comfortably ahead.

The provision to increase the amount of injury time is, however, often employed as it should be. This means that should there be any sort of extra delay in extra time, for example a substitution, the referee can keep the game playing longer. This is precisely what Martin Atkinson did in a famous clash between Manchester United and Manchester City in 2009. He initially signalled four minutes of added time but because of a goal in the 90th minute, and the ensuing lengthy celebration, plus a substitution, the game carried on for longer. This allowed Michael Owen to score the winner 5 minutes and 28 seconds into extra time.

Why Not Just Stop The Clock Instead? 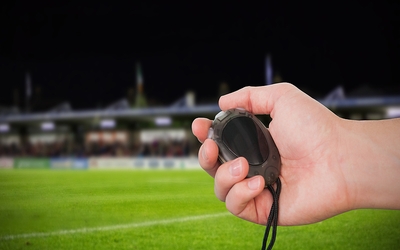 It has been suggested many times in the past that football should follow various other sports and stop the clock each time there is a break in play. This would remove the need for referee discretion in determining how much time to add on, something which can often be a point of contention. After conceding an equaliser in the 95th minute against Everton for example, Ole Gunnar Solskjaer blasted Jon Moss’s decision to add four minutes of added-on time.

A stopped clock system could potentially ensure every game has 90 minutes of actual football played. As this would be far too much for players to handle though, the most common suggestion is to instead have two 30-minute halves. The half would end either as the clock reached exactly 30:00 or the next time the ball went out of play. It seems a perfectly reasonable idea given that most leagues only see between 55-60 minutes of action every game. Indeed, for the 2017-18 Premier League season, the ball was in play for 56 minutes and 11 seconds on average per game.

You could also implement this with 45 minute halves of course.

Would A New System Be Better? 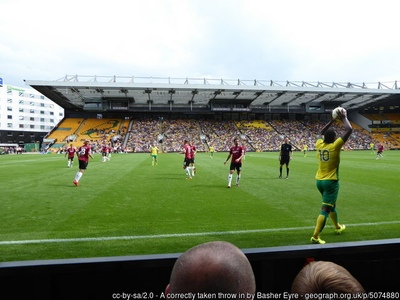 By far the main issue with injury time in its current form anyway, is that the actual added time on can be so inconsistent. If all substantial stoppages were truly accounted for then each half should have much more time added on. FiveThirtyEight looked at how much added time 32 World Cup games ‘should’ have added on and the average was 13 minutes and 9 seconds, across both halves. The actual average was less than seven minutes, meaning that games are around six or seven minutes shorter than they should be.

The problem was far from just limited to the World Cup as games across the globe often lack an adequate amount of injury time. A 2018 game involving Stoke and Watford saw the ball in-play for just 42 minutes. Despite this incredibly low amount of playing time, Jon Moss only added 6 minutes and 41 seconds onto the regulation 90. A mere 42 minutes of action was also seen a clash between Cardiff City and Burnley, partly because Sean Morrison spent an unbelievable eight minutes taking 20 throw ins. Both halves should have had much more added on but instead fans ended up seeing around 10 to 15 minutes less football than they normally would.

Why Stick With Injury Time?

As highlighted above, the current injury time system can lead to some quite wild discrepancies in actual playing time. These are differences that a stopped clock approach would remove entirely, so why is it that the International Football Association Board (IFAB) have not been keen to change the system? It was something brought to their attention in 2017 but they ultimately decided not to proceed with the proposal.

Maintaining a sense of tradition could perhaps factor into IFAB’s reluctance to change the football timing system. Many believe that injury time was first introduced back in 1891 after an Aston Villa goalkeeper purposefully booted the ball away to run down the clock against Stoke. Although Villa themselves have queried the oft-repeated claim, injury time has been a fundamental part of the game for so long. Scrapping something as big as this would no doubt face a large number of critics.

It could well be that the rules change in future but in the meantime, we will simply have to make do with the injury time system as we have done for decades. It is not an element of football that impacts too many bets with the exception of some time-based markets. Two of the big examples include the time of either the first or the last goal. To avoid any potential confusion, many bookmakers give unambiguous ranges like so.

In this instance, rather than say between the 31st and 45th minute, the bookmaker has stated 31st to half time. This means that regardless of the amount of injury time added, whether it is one minute or 10 minutes, this will be a winning selection if a goal is scored during this period. Remember that a goal scored in the third minute of first half injury time, so 45’ + 3’ is not the same as the 48th minute (the third minute of the second half).

Other bookmakers go for 10-minute intervals but again this is easy to get your head around.

As before, any goal scored in first half injury time would fall within the 41-50 selection. This would be the case even if there was seven minutes of added time because for betting purposes the goal is considered to be scored after 45 minutes. Similarly, any goal scored in the second half of extra time would be registered as a 90th-minute goal. So, if a bookmaker was offering a 75-90 minutes goal market, and a goal was scored 90’ + 2, your bet would be a winner.

For games that can go to extra time and penalties, be aware that ‘81 to Full Time’ only covers the regulation 90 minutes (plus injury time). It would not be a winning bet if the game’s first goal came after 116 minutes – i.e. in extra time, as opposed to injury time – as your bet would have already lost by that point.

You might be thinking at this stage that any betting option that includes extra time, so 41-50, 31-half-time or 81-full time, and so on, is best because it will almost always provide more minutes than the other intervals. In the Premier League, there does seem to be a decent element of truth in this with 81-90+ having historically been the most popular time to score. As reported in the Guardian, the 81-90+ period saw 3532 goals scored compared to just 2533 for 71-80 minutes. The first-half interval of 41-50 also saw more goals (2598) than 31-40 (2175) although bear mind this is just any goal, rather than the first goal of the match. Of course, the bookies are well aware of such stats and will set their odds accordingly.