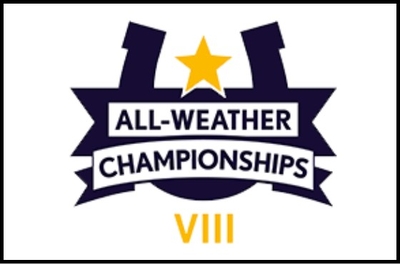 Having only staged its first meeting at Lingfield Park in 1989, all-weather racing may not have quite the rich heritage behind it as its Flat Turf and National Hunt counterparts.

That lack of history certainly hasn’t held it back though, with the newest branch on the racing tree now playing a significant role in the British racing season.

Over the past 30 years, one track has been joined by five more, with the 200 fixtures held across those courses now representing close to 20% of the British racing programme.

Despite this growth, for many years some still viewed racing on a synthetic surface as being something of a poor relation to the Flat and National Hunt games. However, as the quantity of the all-weather fixtures has increased, so too has the quality, and one of the biggest reasons behind this has been the development of the All-Weather Championships.

The brainchild of the Arena Racing Company (ARC) who own four of Britain’s six all-weather tracks, the All-Weather Championships made its debut in 2013. An immediate hit with owners, trainers and punters alike, the initiative serves to provide a real structure to the season, together with a major target for the best horses to aim at, in the shape of the season-ending All-Weather Championships Finals Day.

The All-Weather Championships season operates from October through to March and incorporates all fixtures held at the six British all-weather tracks during this period. In an average year, this adds up to a total of over 1500 races, all of which count towards the all-weather trainers and jockeys Championships.

As with all forms of racing, the cream will invariably rise to the top in the all-weather sphere and, whilst catering to runners of all abilities, the Championship also aims to recognise the very best performers across the full range of race categories. Built into the 1500+ race programme is a stream of higher-class contests, with the goal of attracting the better runners and providing a route to the All-Weather Championship Finals Day. Before we take a closer look at that season-ending finale though, let’s first give details about the tracks at which the action takes place.

The All Weather Tracks

As mentioned, it was Lingfield Park that first brought racing on a synthetic surface to UK racing fans back in 1989. Where one venture succeeds though, others will follow, and we are now in the fortunate position of boasting six varied all-weather venues on British shores – all of which take part in the All-Weather Championship Season.

Essex’s only racecourse, the track that is formerly known as Great Leighs has operated under its current name since 2015. A left-handed oval of eight a half furlongs in circumference, racing takes place on a Polytrack surface. Galloping, with gentle bends, Chelmsford City is renowned as being one of the fairest of the all-weather tracks.

The UK’s original all-weather venue, this left-handed Polytrack course is the sharpest of the six – featuring relatively short straight sections and tight bends. It is of course also the track that acts as host to All-Weather Championships Finals Day.

The newest of the all-weather tracks, having staged its first meeting on the site of the old flat turf course in 2016. Newcastle features both a left-handed oval and a straight course which, at one mile, is the longest straight of any all-weather track in the country. They race on a Tapeta surface at the North East venue.

Arriving on the scene shortly after Lingfield in 1989, Southwell boasts both a left-handed 1m2f oval and a five furlong straight course. Currently, they race on Fibresand at this Nottinghamshire venue, which is much the slowest of the synthetic surfaces. However, there are plans in place to switch to Tapeta in the coming years.

Britain’s first floodlit track, Wolverhampton has featured both a Fibresand and a Polytrack surface since launching as an all-weather venue in 1993 but, in common with Newcastle, now races on Tapeta. A left-handed oval, one circuit measures just over a mile in length.

Aimed at casting the net further afield and attracting the top talent from around Europe to Lingfield, overseas tracks to take part in the past have included Dundalk in Ireland, and the French venues of Cagnes-sur-Mer, Deauville, Chantilly, Lyon, Pau, Marseille and Pornichet (no giggling at that last one please).

Just as Flat racing has Champions Day at Ascot, and National Hunt has the mighty Cheltenham Festival, it is only fitting that the all-weather sphere also has its day in the spotlight, to celebrate the season and pit the best against the best. And that day comes in the shape of the excellent seven-race card at Lingfield Park on All-Weather Championships Finals Day.

This event certainly made a big splash when first appearing on the racing calendar in 2013 due to being scheduled to take place on Good Friday. Before 2013 racing had never been staged on this traditionally blank day on the fixture list, but the new meeting has now taken up residence on the Friday before Easter Sunday, proving popular with racing fans and bookmakers alike. And much of the reason for that comes from what is invariably a cracking card in terms of quality.

Designed to cover all bases, Finals Day provides a championship level contest across a range of distances and race categories. The glory of being crowned champion of their division no doubt provides an incentive for the owners of the top horses to enter their charges on Finals Day, but the money isn’t bad either! With a total of £1 million on offer across the seven events, this is in fact the richest all-weather card to be held anywhere in Europe. Let’s take a closer look at the seven contests on offer.

A chance for the up and coming jockeys to shine on the big stage, this seven furlong handicap contest is the least valuable race on the card, but still offers £50,000 in total prize money.

As the title would imply, this event is the longest on the card and sees the season’s top stayers do battle over the two mile trip. Offering £150,000 in prize money, the race is open to runners aged four and older.

Open to qualifying lillies and mares aged four and above, there is another £150,000 up for grabs in this seven furlong event.

The speedsters are also catered for, with this six furlong contest annually attracting the fastest horses on synthetics. The title of Champion All-Weather Sprinter and £150,000 in prize money are on offer in this one.

Taking place as it does in March/April each year, this £150,000 event showcases the emerging talent of the sport, with many of the runners likely to have qualified for the race when still only two years of age.

The prize money is upped a notch to £200,000 for the main event on the card, as the best of the middle-distance performers aged four and older lock horns over 1m2f.

The milers round out the action in the £150,000 finale. Open to all qualifying runners aged four and older, the race regularly provides a thrilling conclusion to the card.

In addition to the races themselves, Finals Day also sees the awards dished out for the Champion Jockey, Champion Apprentice Jockey, Champion Trainer, Champion Owner and the Winning Most Horse of the season, all of which adds to the celebratory atmosphere of the day. 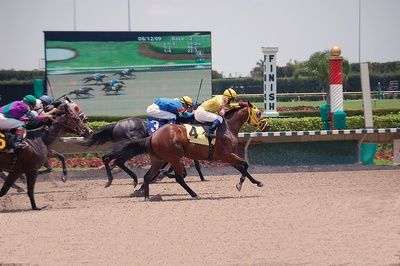 With so much prize money on the table, connections of the top all-weather runners are no doubt keen to bag one of the limited starting stalls on offer. So how do horses qualify for Finals Day?

There are two routes to the Good Friday fixture. The first of which states that qualifying runners must have run three times on the AW in Britain, Ireland or France, or twice at one of these AW tracks and once on the dirt at Meydan. Each of these runs must have taken place between 20th October of the preceding year and the Saturday before Good Friday. All qualifying runners wishing to line up in the respective races will then be ranked according to their official BHA rating, with the top-rated runners making the final field of twelve.

The second method in which a runner may make it to Finals Day is to win a Fast Track Qualifier. These are specially designated events that are announced before the start of the season and take place at various tracks in Britain, Ireland and France. Winning one of these contests guarantees a free place in the corresponding Championship event, irrespective of BHA rating. There are four Fast Track Qualifiers for each of the races on Finals Day – barring the Apprentice Handicap.

Runners are entitled to win Fast Track Qualifiers in more than one race category but must make a final decision 48-hours before Finals Day as to which race they wish to race in. Any filly or mare who wins a Fast Track Qualifier in the Sprint or Mile division qualifies both for the final related to that qualifier, and the Fillies’ and Mares’ race on Finals Day – again having to settle on a specific race at the 48-hour declaration stage.