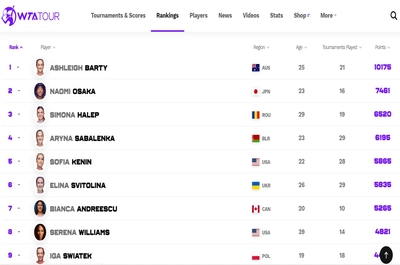 As with just about all individual sports, tennis uses a ranking system to ascertain who is the best player in the world at any given time.

The rankings also serve other key purposes and we shall look at those shortly. In this piece, we will explain briefly how the ranking system works.

Both use systems and methodologies that are very similar.

Also note that for the purpose of this article we are talking about singles rankings, not doubles and we will focus more on the men’s rankings, noting any major differences in the WTA as they come up.

What Are Tennis Rankings Used For?

Before we look at how players move up and down the world rankings, let us first look at why we even have them and what they are used for. In both the men’s and women’s games, perhaps the key purpose of the rankings is to determine who qualifies to play in a given tournament and what shape, via seedings, the draw takes.

The biggest events, including the four Grand Slams, feature 128 players, with other tournaments including as few as just eight players on occasion. For most regular season events the main draw will see between 32 and 96 players take part. Whilst some players in the draw will be there thanks to wild cards, invites and success in qualifying matches, most gain entry into these tournaments on the basis of their world ranking. So world ranking is crucial for a player to be able to play in the biggest and best tournaments.

Larger tournaments will have up to 32 seeded players, with smaller ones perhaps having just eight. These seeds sometimes receive a bye through the first round depending on the number of players in the draw. Even when they do not receive a bye, they benefit by the draw being made in such a way that seeded players do not meet each other until the latter stages of the competition. Indeed, should every match go according to the seeding, the semi finals will see the number one seed beat the number four seed and the number two seed get the better of the number three seed.

Seedings do not have to directly follow the world rankings, although they often do. Whilst form, injuries and the surface of the tournament may be taken into account, usually the number one player in the world is the top seed, number two the second seed and so on. Some may argue this system is unfair and helps maintain the status quo but of course fans would much rather see the best two players meet in the final than in the first round.

Beyond their main use as a tool for determining who qualifies for a tournament and who is seeded, rankings also confer prestige. Being a top 100 player, top 50, top 20, top 10 or for one talented sportsperson, the number one ranked player in the world, brings incrementally greater rewards. Such players will benefit from more media coverage and commercial interest and, where applicable, command higher appearance fees and endorsement contracts. As with seedings, world rankings are not the only factor considered but they are the biggest, simplest and easiest to quantify.

How Do The Rankings Work?

The men’s and women’s ranking systems were introduced in 1973 and 1975 respectively and both use a rolling 52-week system. That means that performances within the last 12 months contribute to the current rankings but before that, they do not. In simple terms, the bigger tournaments are worth more points than the smaller ones and the further you go in an event, the more points you win. So far, so simple.

The systems have been tweaked and changed over the years with minor alterations to the points earned and the status afforded to different events. However, as of 2021, the ATP rankings are based on up to 19 tournaments (18 for those who did not play in the ATP Finals) and the women’s are based on up to 16 events. In both cases, this always includes the four Grand Slams plus the events in the tier beneath those and the Finals.

The table below shows the points earned depending on the level of the event and the round a player gets to. Note that a similar structure is used in the women’s game according to the tournament tiers used by the WTA.

Note that the ATP Finals is in many ways a one-off event with its own unique format. Each win in the round-robin phase is worth 200 points. In addition, the overall winner receives 1100 points and the losing finalist gets 600. It should also be noted that some other minor variations occur across many of the tournaments according to how many players are in the main draw and whether they have received a bye.

Both the ATP and WTA rankings take into account verified player injures and special circumstances so as to not unduly penalise players. You can see more about this, protected rankings and various other quirks of the ranking system at the official ATP site. Here you will also find the most up to date information on the ranking structure and formula for the current season. 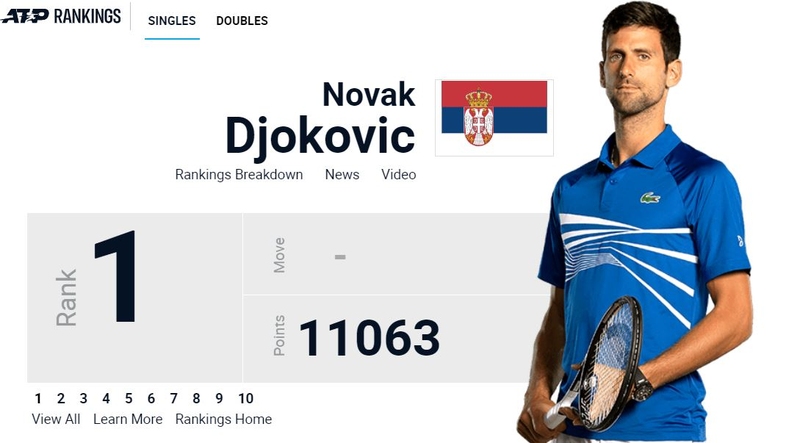 Here are a few stats and facts about the ATP tennis rankings to impress your friends in the pub, give you the edge in the next quiz you end up at, or just for your own titillation. Note that these facts are correct as of May 2021.