Betfred is one of the UK’s largest bookmakers, and the brand is well known throughout the country thanks to its chain of betting shops which can be found all over England, Scotland, Wales and Ireland.

Betfred may not be one of the biggest names in the online betting world, but continual expansion efforts have seen the bookie not only move successfully in this direction, they have also become one of the more trusted names in British online betting, with thousands of players logging in and placing bets every single day.

Now boasting features such as mobile betting, live-streaming, and an impressive number of betting markets, the bookie’s online presence continues to grow. In this post, we’re going to look at the Betfred website, as well as some of the markets and bet-types that the company offer.

As one of the UK’s most prominent names in bookmaking, Betfred offer an incredibly diverse range of betting markets for players to enjoy. As well as a wide coverage of different markets, they also host a very generous range of bet-options within those markets.

Due to the layout and design of the site, finding all of the different markets is a breeze; you don’t have to navigate through hundreds of menus to find the area of the site you want, which can be maddening.

Betfred’s biggest market is football, and you’ll find football betting opportunities from all over the globe, although naturally the emphasis is on UK leagues like the Premiership, the Championship, and the various lower leagues.

The dominance of football on the site is further compounded by the regular ACCA’s Betfred offer, allowing players to receive money back in the shape of a free bet if one selection loses.

Football aside, Betfred’s other most popular market is probably British horse racing, and virtually all races from each of the country’s 60 racetracks can be wagered on at Betfred, thanks to their partnerships with other bookmakers and racing tracks nationwide.

American markets are available too, such as: NFL, Baseball, Basketball, and Ice Hockey (NHL). Although in our opinion, where Betfred really shine is with their ‘unusual markets’, where you’ll find a number of weird and wacky betting opportunities.

While not necessarily unusual these days, the Political markets at Betfred are still worth mentioning simply because they’re always current and up-to-date. The two main Political markets offered are understandably the UK and US Political scenes, although other elections are available; at the time of writing, for example, the 2017 German Federal Election is being covered quite heavily, with a number of betting options available.

As you’d expect, UK and US Political markets are equally as varied, and you can bet on who the next Prime Minister will be, who the next majority party will be, and so on.

Elsewhere, if you head over to the TV/Specials menu, you will find some of the really fun bets, which are separated into four sections: Royalty, TV Shows, Awards, and Novelty.

The ‘Royalty’ bets are, unsurprisingly, all based on the activities of the Royal Family, and you will be able to place bets on everything from the gender of the next Royal baby, to what colour dress the Queen will wear in public next.

Head to the ‘TV Shows’ section, and you’ll find the ability to bet on the winners of a number of TV shows: The Apprentice, Britain’s Got Talent and MasterChef being just a few of the options available.

The ‘Novelty’ bets section is where the really wacky stuff happens, and while they are subject to change quite quickly – due to the fact these markets are not generally that popular, and often get taken down at a moment’s notice – one of the most common bets here is “Will it snow on Christmas day”. This UK bet is something of a household name, allowing punters to predict whether or not various different regions in the U.K will see a White Christmas. 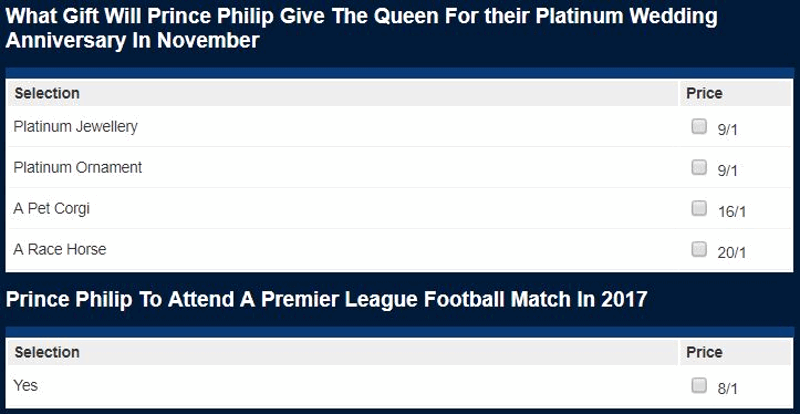 How Good are the Odds?

Betfred are known for offering odds that are OK, and OK is about as fair a word as can be used here really.

Their odds might not be the best, but they are steady; you won’t usually find any exceptionally long or short odds displayed, which is preferred by their regular bettors who like to have that stability.

Promotions, however, come along regularly at Betfred, and many of these include price boosts and enhanced odds, so it’s well worth keeping an eye on the latest promotions and bonuses to make sure you take advantage of any of these price increases.

Betfred offer decent in-play betting options, although many of these in-play services are piggy-backed from other bookmakers; and while this isn’t anything to get concerned about it is worth knowing, especially if you are wondering why the interface and odds are the same as you would see at other bookies.

Perhaps the best feature about Betfred’s in-play betting is the cash out feature, and while most sports books offer cash-out on in-play bets, Betfred are one of the most responsive, with their cash out prices often ranking highly. So, if you’re a fan of cashing out your in-plays, then Betfred is likely a good option for you. 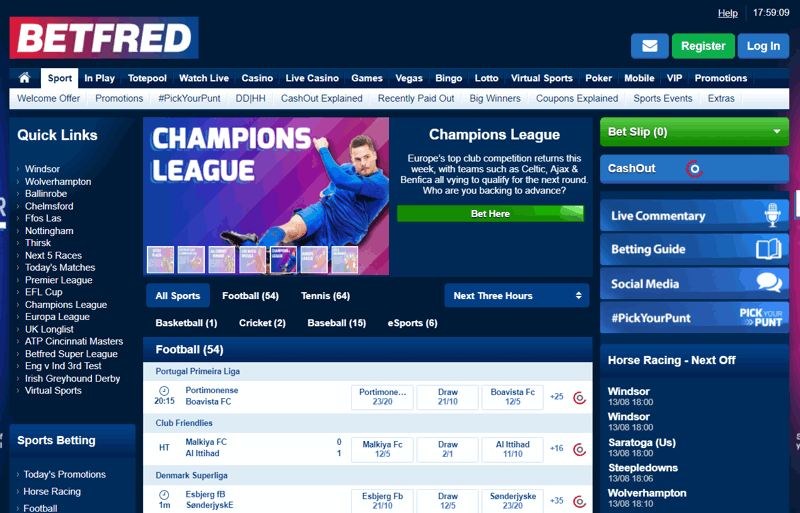 Betfred’s website has recently undergone a welcome re-vamp, with a complete redesign resulting in a more modern look and up-to-date feel.

The functionality of the site is pretty good, and the easy-to-use navigational menu makes working your way around the site hassle free. You can also add ‘Favourite’ sports to your account, which means you can quickly and easily access the markets and events you most commonly bet on – not exactly pioneering, but useful and worth pointing out none-the-less.

The Betfred mobile website is aimed primarily at Apple and Android users, but the site is likely to work on most mobile devices providing they are connected to the internet and are capable of running mobile websites.

The mobile website allows you to enjoy a seamless betting experience whilst on the move on your mobile phone or tablet. Whether you’re watching the football at the pub and want to make a bet, or just lounging around at home on the sofa watching some late night Basketball and want to bet on the overall winning margin – Betfred’s mobile site allows you to bet from anywhere so long as you have a working internet connection.

You can access thousands of betting markets from your mobile device, and each sports market includes thousands of individual bet types which you can wager your money on.

There are also downloadable Betfred Apps, available to iOS and Android users, which are virtually identical to the mobile version of the site, carrying the added benefit of not needing login details to be entered repeatedly.

While we have already covered this, the responsiveness and adaptability of Betfred’s mobile betting deserves a second mention, as it really is one of the core features of the bookies makeup. Regardless of whether you choose to download the apps or just use the mobile-optimized website, you’ll enjoy a high-quality and reliable bet experience, so it’s well-worth checking out, especially if you are a keen mobile player.

Betfred’s cash out system is simple, reliable, and fast, and you’ll experience some of the most up-to-date price options around. In fact, Betfred were recently voted “Best UK bookmaker for online cash out prices”, so it’s definitely worth looking at if you use cash out functions regularly.

Most bookies these days offer a varied and well-rounded selection of betting markets, but Betfred deserve a special mention here due to the sheer number of markets you’ll find. It’s not just the markets that are attractive; Betfred also offer a tremendous number of events within most markets, particularly football, and as stated earlier the sports book offer betting markets on every UK and Irish Horse race, appealing to all type of player.

Betfred are one of the UK’s largest high-street bookmakers with hundreds of stores spread throughout the UK and Ireland, second only to William Hill and Coral.

One of the reasons that Betfred have seen significantly more success on the high street than say, Paddy Power, is the fact that their prices and market-ranges are superior; and with such a large network of high street betting shops, they are able to offer very generous prices and jackpots (in the case of their lotto games), and this is just one of the reasons why they’re so popular with punters.

While they’ve come under criticism for the inclusion of the FOBT machines (known also as fixed odds betting terminals), the shops display high levels of customer care, with responsible gambling at the forefront of their ethos and brand messaging.

Betfred don’t technically operate a maximum bet policy, although certain markets and events are automatically limited in how much you can wager.

This will be displayed when the bet is added to your betslip, and if you’re trying to place a bet that’s worth more than the allowed amount, you will see an error message which explains the trading decision.

Payouts are generally capped at either £500,000 or £1 Million, depending on the event and the type of bet placed; although again, some markets do have different payout limits, so it’s always worth familiarising yourself with these before placing large ACCA’s or Lucky 15’s etc, so that you aren’t left disappointed.

Payment methods at Betfred are numerous, with UK players able to use all major Debit Cards alongside a number of EWallets, such as: PayPal, Neteller, Skrill, and Entropay.

Withdrawals are usually processed within around 24 hours, although as per Betfred’s terms and conditions, they can take up to 72 hours and potentially longer if you are not yet a verified user.

Named after its co-founders, Fred and Peter Done, Betfred is one of the world’s oldest bookmakers. Since the company’s first shop was opened in 1967, the bookie has gone from strength to strength, with their last recorded turnover a whopping £3.5 Billion – and that was back in 2004 before the online market really kicked off.

The company’s head office is based in Birchwood, Warrington, and while the management side of the business has seen quite a lot of change during its lifetime, the chain remains one of the strongest performing and most trusted bookies in the UK, both on and off line. This is evidenced by the large market presence that they enjoy, with 1,370 betting shops throughout the United Kingdom.

One of the most notable events in the company’s history was during the 2004-2005 Premier League season. The company founder and CEO at the time, Peter Done, bet Victor Chandler (the namesake of BetVictor) a cool £1,000,000 that Manchester United would finish higher than Chelsea. Unfortunately for Done, Chelsea ended up finishing top, and Done lost the lot.

While this was probably a drop in the ocean for Done, some punters questioned the move being so public, apparently worried about potential conflicts of interest. These claims and fears were generally debunked however, with most agreeing they were irrational and silly.

Another notable moment in Betfred’s history was in 2011, when they purchased Totesport from the British Government. This widened Betfred’s reach and ensured that the Tote markets – the most highly-regarded and respected in British horse racing – remained intact; and Betfred won the rights to offer exclusive pooled-betting on UK horse racing for 7 years. So come 2018, all bookies will be able to offer the same. Interesting times ahead.

Today, the company focuses largely on mobile betting, and their apps and mobile website are regularly updated and improved to ensure they are at the forefront of betting technology.