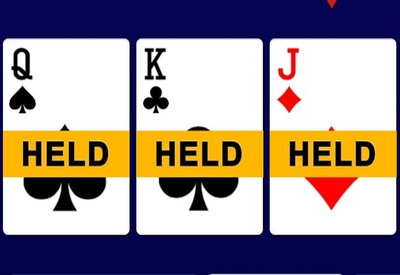 Some casino games, for example baccarat, roulette and slots, require no skill or real knowledge on behalf of the player. No matter what you do, the house edge will remain constant and a hugely experienced and knowledgeable player can expect to have the same results as a total novice. Other games, for example blackjack and, would you believe it, video poker, will deliver different outcomes depending on the decisions the player makes.

This is not to say that video poker is a game of skill because ultimately it is luck that will probably decide whether you win or lose. Like blackjack, the house edge is very, very low when it comes to video poker. However, in order to realise the lowest possible house edge, the figure that is typically stated for the game, a player must make the right decisions in any given situation.

In both the aforementioned games, the optimal method of play is usually referred to as basic strategy. It is the mathematically sound way of giving yourself the best possible chance of winning and reduces the house edge to the lowest possible amount. In any conceivable position, it tells you what to do and so when it comes to video poker, this means deciding what to hold. 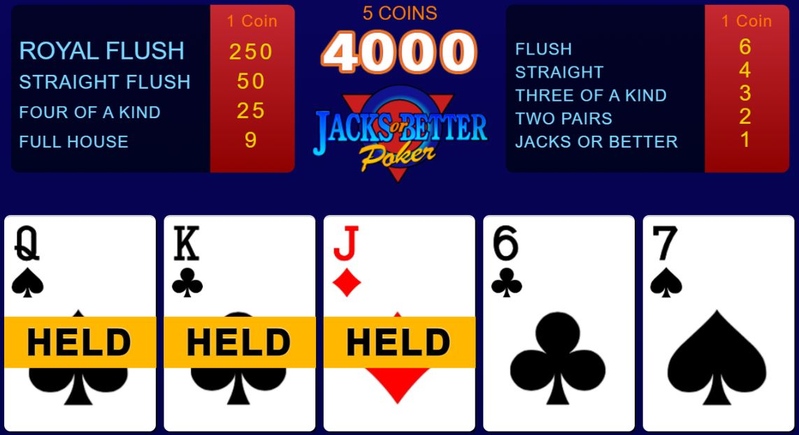 There are many variations of video poker and the subtle rule differences mean that each one has slightly different versions of basic strategy. It is beyond the scope of this feature to go into what to hold for all the different variants of the game so we will focus here on Jacks or Better. This is the classic iteration of video poker and the one that often has the lowest house edge, as well as being the one you are most likely to encounter at an online casino.

Because there are so many more variables when it comes to video poker (in comparison to blackjack), basic strategy for this game is more complex than the relatively simple charts and tables which cover blackjack. There are slightly simpler versions of basic (optimum) strategy that are considerably less involved and yet where the player only makes a tiny sacrifice in terms of their expected outcome.

We will focus on a simple method here, one which delivers a house edge just 0.08% worse than the far more complex strategy. That means that assuming you are playing a full pay machine you can expect to see return of 99.46% rather than 99.54% (equating to one extra hand lost per 1,178 played!). Note that a “full pay” machine is one which pays out at the highest rates and for Jacks or Better this means paying nine units per unit staked for a full house and six for a flush.

In the table above you can see a list of all the possible hands, or draws to hands (essentially potential hands). The best are at the top and the worst at the bottom and this simple version of basic strategy means you just have to choose whichever hand/potential hand from the five cards you have is higher up. 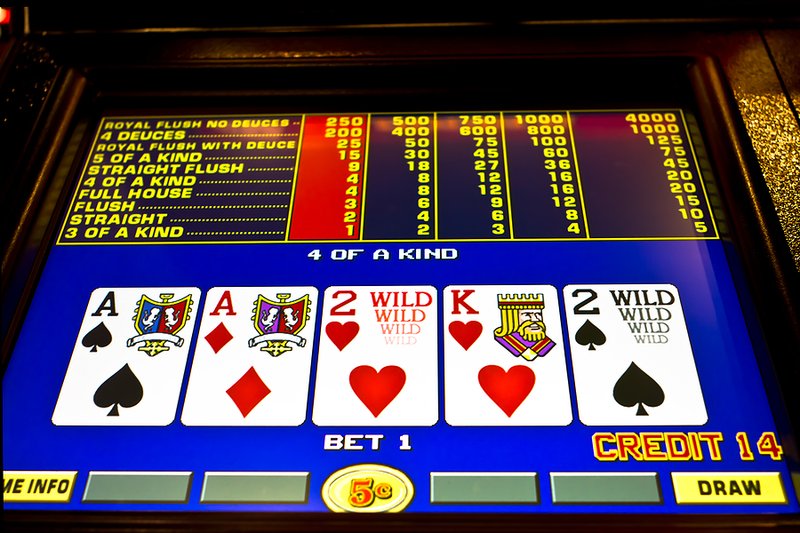 For the purposes of video poker strategy, the following definitions should be noted:

With some initial hands it will be very obvious what you would do but with others it is more complex. Where your hand has the possibility of a making a number of different winning hands, knowing which to go for is not always easy and sometimes the edicts of basic strategy will go against your intuition. None the less, these are the right calls to make.

To make it easier to understand how the table of hands above works, let us consider a hypothetical game of video poker. Your first five cards are as follows:

These five cards throw up three main hands as possibilities, as below:

Comparing these three options on the table above, we can see that two high cards of the same suit is the lowest. Of a little more value is a low pair, in this case a pair of fours. A little further up the table we come to “4 cards towards a flush”. If the player discards the 4 of spades then they require any diamond in order to complete a flush. 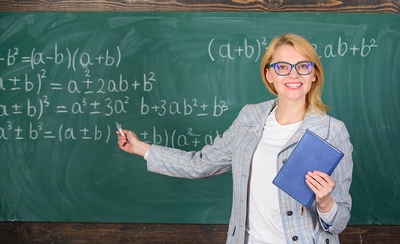 The maths that underpin basic strategy determine that this decision will yield the best results on average in the long term. In truth, anyone with a fairly basic grasp of maths would probably come to the same conclusion relatively easily. A flush is a relatively high-paying hand and, what is more, there are a huge 10 cards in the deck (assuming a single-deck game) that can complete it for you.

So, for example, the table above dictates that should a player actually have a flush straight off the bat, if they also have 4 to a royal flush they would break their winning hand in order to try and land the big payday. So let us assume you are dealt the following:

You have been dealt a flush which pays a handsome six times your stake. Basic strategy, however, tells you to forget about your flush and throw away your 2 in the hope of landing the 10 of spades to make your royal flush. Mathematically speaking the chances are that you will actually lose the hand in doing this and walk away with nothing. There is a decent chance you will make a high pair and a slightly lower chance that you will hit another spade (but not the 10); but overall, the more likely outcome is that you lose. So why break your winning hand?

Well, whilst swapping a guaranteed win, a decent win too, for the unlikely chance of landing a 1 in 47 bet (so around a 2% likelihood of success) may seem crazy, it is not. And that is because your reward far outstrips the slim odds of success. You may lose your standard six-unit win but you might win 800, which is more than 130 times that! And given there is a pretty good chance you will make a high pay or a flush anyway, it is a risk that is absolutely worth taking. Below we take a look at some other common decisions a player may face where the potential reward is worth the risk.

One decision which many query is what to do when it comes to choosing between a low pair and a high card. If we consider a hand with a pair of sixes, an ace and then two unrelated cards, many video poker novices may wonder what the best call is. Well, with a single high card the second lowest of all possible deals, the table, which is to say basic video poker strategy, is clear: keep the low pair, which sits six whole hands above high card.

The reason this may seem counterintuitive is because by holding the ace the player gets four new cards in which to hit another ace to make a winning pair or even make a better hand. In addition, there are three aces out there. If they hold the low pair, that in itself is not a hand that pays anything. At the core of the hand they are receiving three new cards, rather than four, whilst there are only two sixes, compared to the three aces.

However, once again, the maths behind basic strategy tells us that keeping the low pair is by far the more productive call. Chiefly that is because three of a kind pays three times as much as a pair, whilst there is also an outside chance of a full house or even four of a kind.

Another common decision a player is faced with is when they are dealt a high pair but also have the makings of a straight or a flush. A flush in particular is perceived as a high value hand and with just one card needed to make it there is a strong temptation to split up the high pair and go for glory. After all, four to an outside straight needs just one slice of luck and there are eight possible cards that will deliver. With a four to a flush, again, just one card is needed and there are 10 of that suit somewhere in the pack.

However, once again, the simplicity of the table and basic strategy show us that in such a position, faced with choosing between a high pair (a winning hand) and an oh-so-close flush or straight, it is the high pair that the video poker pro will favour. A high pair, though it merely returns your stake and is not really a win at all, is actually the sixth best hand (or group of hands) on our table. That makes it a better hand than four to a flush and a much better option that four to a straight.