The sport of horseracing is littered with moments of triumph and disappointment and, despite cursing their luck at times, fans of the game likely wouldn’t have it any other way – it’s what makes it so exciting after all.

When we speak of triumph, we are of course referring to the thrill of backing a winner. From the all-the-way romp, to a horse just getting up in a head-bobbing finish, there’s nothing quite like seeing your selection come home in front, however it manages to do so. In order to really experience this thrill of winning though, the possibility of defeat must also be present.

And just like victory, defeat can come in many guises. On occasion punters will be left bemoaning the fact their selection suffered trouble running, or perhaps the jockey gave the runner a poor ride – the blight of betting shop punters up and down the land. Most commonly the reason a bet may lose is simply down to the fact that our horse didn’t run fast enough on the day. Hard to swallow, but it happens.

Whilst all of the above are upsetting, there is another manner in which our selection may fail to deliver the anticipated returns. Those occasions when we quite literally see our bet go down. We are of course referring to runners falling during a race, and it is to that hazard of the racing game to which we turn our attention here; looking first at the different types of fall, before moving on to just how common an occurrence it is in modern day horseracing. 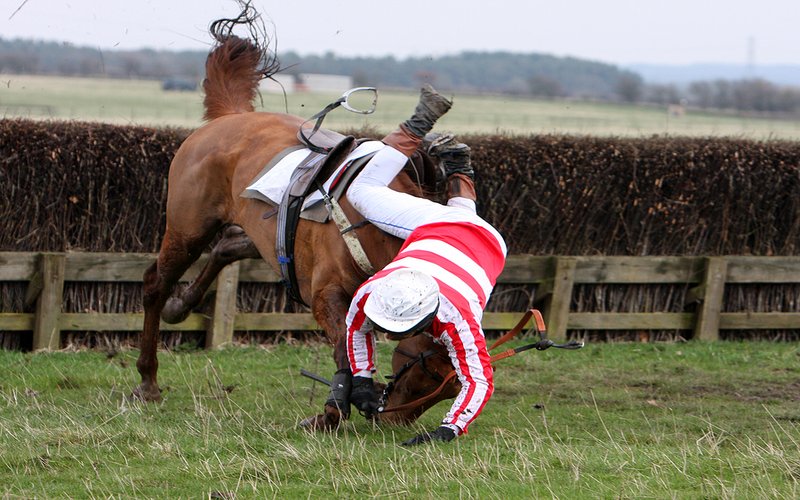 First things first, whilst all falls have the same result from a financial perspective i.e. you will lose your bet, not all falls are created equal. There are in fact five main ways in which a horse can fail to complete the course in the hoped for manner.

Unlike some of the jargon in horseracing, the language used to denote falls and non-completions is thankfully self-explanatory for the most part – albeit often abbreviated. So, what exactly are these types of fall? And how are they noted on a racecard?

Denoted as F on a race card, this signifies those times when a horse did indeed make a mistake at an obstacle and then fell to the turf. The worst possible outcome in a jumps race, but thankfully, on the vast majority of occasions, horse and jockey are soon back to their feet and escape unscathed.

Not so dramatic as the fall, an unseat usually occurs due to a less jarring jumping error. Not quite bad enough to see the horse themselves go to ground, but still sufficient to send the jockey on an unwanted journey from the saddle to the turf. A previous unseat in a horse’s form figures will be signified by a U or UR.

Like all of us when it comes to work, sometimes the horse just doesn’t fancy it. Perhaps sensing an impending fall or unseat, runners will on occasion simply refuse to jump an obstacle, choosing to either come to a standstill, or veer around the jumping challenge – both of which end the horse’s participation in the race. Better than a fall for the horse and jockey, but the same result for the punter. Refusals are predictably denoted by an R on the race card.

Possibly the most unfortunate manner in which to lose of them all. Brought Down (BD on the race card) refers to those occasions when a horse is sent tumbling to the turf, not due to any mistake they themselves have made, but rather by virtue of being impeded by the error of another. Most commonly this will occur when a runner is travelling in behind a faller and simply has no time to get out of the way, or possibly due to being knocked off balance by a faller to either side or just in behind.

Not strictly a fall as such, but in addition to the letters BD, R, U and F, another to commonly appear amongst a horse’s form figures is that of the letter P or PU. And just as with those other letters this abbreviation doesn’t refer to anything good – denoting those instances when the runner was pulled up by their jockey rather than continuing their participation in the race. There can be a number of reasons for this, from the horse simply not feeling right or clearly being tired, or perhaps as a result of an accumulation of jumping errors. If the jockey feels the horse has no real chance of getting back into the contest and continuing in the race will only cause discomfort to the animal, they will voluntarily end their challenge.

How Likely Is A Horse To Fall?

The first thing to consider when attempting to predict how likely it is that a horse may fall is the type of race it is running in. Clearly flat races, with their complete lack of jumping obstacles, are very unlikely to see a faller. That said, flat horses will occasionally be pulled up, or perhaps slip on the bend and fall, but such instances are incredibly rare. It is also very rare that a collision between two horses will cause a fall on the flat but it does happen from time to time.

It is National Hunt (jumps) racing which predictably sees the vast majority of fallers and non-completions, but even within this sphere things are heavily weighted towards one particular race type. Whilst National Hunt Flat races (Bumpers) feature no jumps at all, and hurdles contests only relatively flimsy obstacles which are more likely to be knocked over by the horses than vice versa, things are altogether different in the realm of chases.

Featuring far more imposing and sturdy obstacles, it is not for nothing that chase events are thought to represent the ultimate jumping challenge, and it is here where the overwhelming majority of falls occur. The unforgiving fences are higher than hurdles and whilst a horse may brush through the top of them, any serious contact invariably leads to some form of serious trouble.

With that in mind, it makes sense to focus upon chases when determining just how often runners do fall. For purposes of our analysis we selected a 10 year window covering every UK National Hunt season between 2005/06 and 2014/15, and calculated the number of fallers as a percentage of the total number of runners – classifying a faller as any runner officially listed as having fallen or unseated their rider during a race. 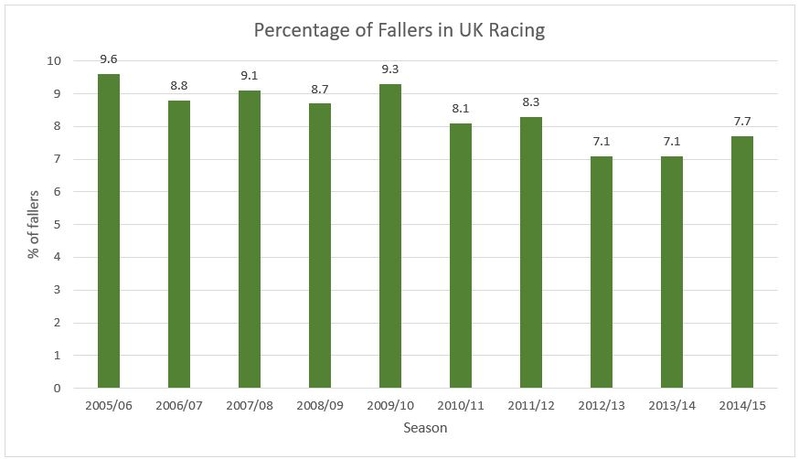 These figures do of course only represent an average and can vary considerably due to a number of factors including the track at which the race take place. Aintree’s formidable Grand National course returned a figure of close to 25% for falls and unseated riders over this period for example, whilst the easy chase track at Carlisle was down below 4%.

Possibly the most important thing to bear in mind when assessing the likelihood of a runner to fall though is the previous record of the horse in question. Some horses are simply better jumpers than others. Should a chaser with recent form figures of FRUUF then add another unwelcome letter to his collection in their next start, we probably shouldn’t be all that surprised.

The final thing to note is that the above chart displays a definite downwards trend, which must be taken as a positive for the sport in general. This decrease is most likely down to the increasing safety measures applied by the British Horse Racing Authority, including visibility improvements and the sturdiness and positioning of the fences. So what are the chances of your runner falling during a horse race? We would say the chances are approximately 1 in 10 … and falling.