Coral is one of the largest gambling companies in the world, and when it comes to the UK, they are arguably one of the most popular bookmakers on the high street.

While the gambling corporation may be most closely associated with their sponsorship banners around the greyhound tracks, and the 90’s-nostalgia inducing blue and yellow shops littering the high streets, they also boast an impressive online presence; and the bookie have managed to transfer the reputation they enjoy in the physical world, to the online world.

Now owned by the newly founded Ladbrokes Coral group, Coral’s online sportsbook is one of the most popular in the world. In this post, we’re going to look at some of their core features, as well as their payment methods, market types, and mobile betting. 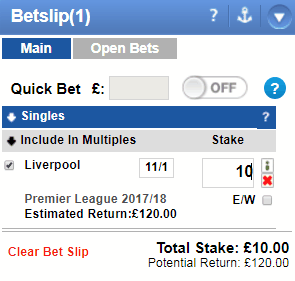 One of Coral’s main strengths is the sheer scale of betting markets they offer. Bets on virtually every sport – plus a healthy selection of novelty and non-sporting bets – can be placed online, making Coral more than equal to the world’s biggest bookmakers.

The market the bookmaker is best known for, perhaps, is its dogs and horses; and Coral manage to attract a huge number of players due to the wide coverage they offer and the ability to bet on events both in the UK, and in other parts of the world.

It’s rare to find a market not offered at Coral, and everything from Football, NFL, Ice Hockey, and Motorsports are available – many with over 100 individual markets per event.

Plus, thanks to daily price boosts, some of the more popular sports (mainly Horse Racing, and Football) offer some of the best odds market wide.

Sticking with Sports to begin with, the less common markets available include: Water Polo, Volleyball, GAA and Wrestling; the latter of which is a rare sight indeed, as, due to the sport being admittedly fixed, many bookmakers are understandably hesitant due to the threat of insider betting.

Moving away from physical sports, Coral also offer a fairly substantial virtual selection to bet on. Not every players cup of tea, but a good addition nonetheless, especially with odds drifting as high as 250/1!

The bookie also offers a number of TV and special bets, which range wildly from bets like whether or not it will snow on Christmas Day, to what the sex of the next Royal baby will be, and so on. You can even bet on who will follow Francis 1 to become the next Pope.

In fact, Coral take a pretty interesting approach to some of their markets’ offerings, with the “Next Pope” bet offering a number of – well, unusual selections let us say. Of course, with odds of 8/1, you’d be forgiven for sticking a few quid on Cardinal Luis Antonio Tagle, or Cardinal Marc Ouellet becoming the next leader in the Vatican.

But you can also take juicy odds on some of the more obscure bets. For instance, a massive 1,000/1 price awaits players who bet on disgraced Top Gear Presenter Jeremey Clarkson, or indeed the renowned atheist Richard Dawkin being appointed the next Pope. It is this good humour and variety, however, that makes Coral such a hot-spot for punters. 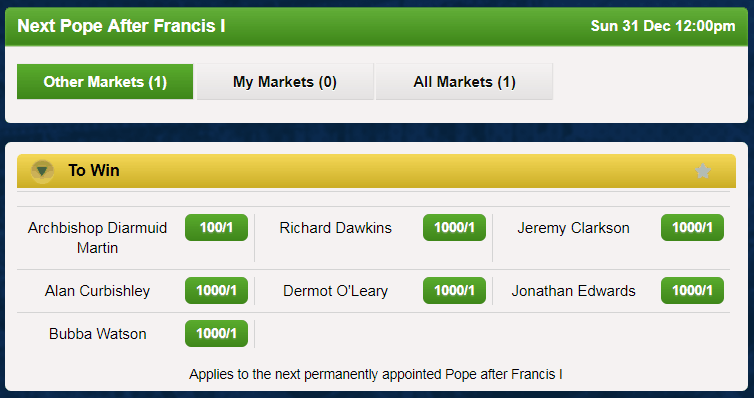 How Good Are The Odds?

Coral’s online odds are, generally, a lot better than in their physical shops; and the bookies have actually come under criticism for the short odds offered in some of their betting shops, particularly on Football and Golf bets.

Online however, Coral offer an above average range of odds, and their Horse Racing is where the best value can usually be found, with price boosts becoming available on selected races almost every day of the week.

The only area that tends to offer bog standard odds is the in-play betting, with better prices usually to be found elsewhere. 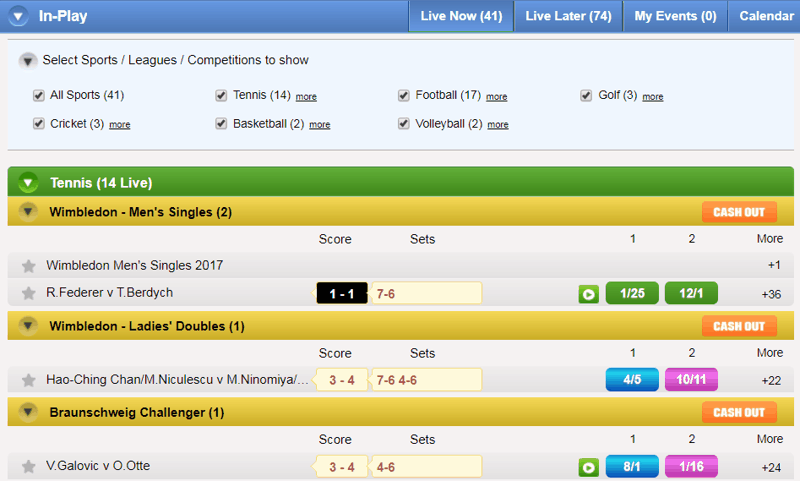 Coral’s in-play betting section, despite not offering the best odds in the world, is certainly one of the more reliable betting systems around, and while the interface itself isn’t much to look at, the bet slip and markets offered are made immediately apparent, and it takes a matter of seconds to find the market and specific event you want to place bets on.

What’s really cool about the way Coral position their in-play section, is the ‘Select Sports’ area at the top of the page. This is filled with radio check-boxes which you can click or not depending on what you are interested in, to easily categorise the games without the page reloading or refreshing; a big bonus when trying to place bets with just seconds to spare. 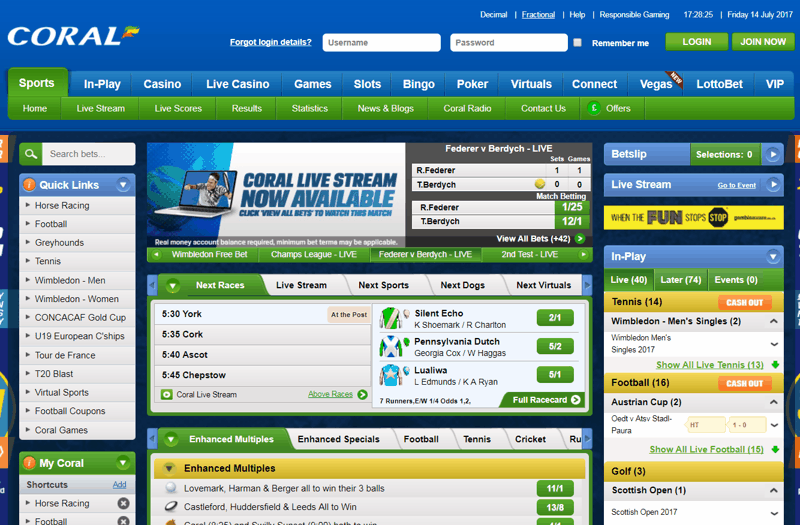 Coral’s website is fast, reliable, and secure, but there’s no denying it’s in dire need of a visual make over. It has a dated late 2000’s vibe to it, and was clearly designed before practices like HTML5 and before web-standards were improved.

The bookie is clearly focusing more on the functionality and performance of the site, which is probably more important than the way it looks, but it would be a good idea for them to bring it into the modern day sooner rather than later.

In terms of actually using the site, however, it’s hard to fault. Placing bets is a particularly notable plus point, with a responsive bet slip and a selections slip found on the left-hand side of all pages. Thankfully, unlike in the early days, the bet slip area saves by default (even when you’re not logged in) so you can navigate around the website freely without worrying about losing your bets, or end up staring blank faced at an empty bet slip after spending the last 20 minutes making your ACCA selections.

Placing multiples and full cover bets is easy too, and any time you have more than one selection in your bet slip, you will see additional betting options appear automatically at the bottom of the slip next to the bet amount.

The bet slip can cause confusion with some less experienced players, however, as the multiple betting options don’t appear until you’ve reached the minimum selections required: so, for example, if you had three selections, you wouldn’t see a Lucky 15 appear, until a 4th was added.

Coral offers four different types of downloadable apps: Sports and Casino, Vegas, Live Casino, and Poker. There is also a Radio app which live-streams audio action from all of the major sporting events including UK and Irish Horse Racing; although as it doesn’t allow you to place any actual bets, we won’t cover that here.

The Sports and Casino app is the one we’ll be looking at, and this free application is available for iOS players, Android players, and – most recently – Windows 10 users too.

iOS players can download the app straight from Apple’s AppStore, whereas Android players will need to download it directly from the Coral website, due to Google banning real-money gambling apps from the PlayStore.

Windows 10 players can also download the app for free using the ‘Store’, which is pre-installed on all Windows 10 computers.

Mobile betting is much the same as you would find on the desktop website, although one of the bonuses of using the app, is the fact that you don’t need to manually enter your log in details each time you play.

All of the markets found on the desktop site are available to bet on via the app, although in-play betting does not benefit from the same visual high quality as the desktop site; and there are also 250 casino and slot games within the app if they are you’re thing. 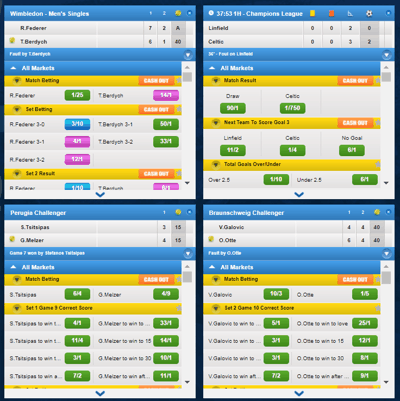 One of the newest features finding its way to the Coral website is the ‘Multi-View’ which is an industry first. It can be accessed simply by clicking ‘Multi-View’ tab on the navigation bar.

The ‘Multi-View’ window breaks the screen up into four squares – with the bet slip still found on the right-hand side of the page – and you can choose to drag various events into these four squares to allow for quicker, easier bet selections. For instance, if you only bet on four sports: Football, Hockey, Tennis, and Golf; you can add these four sports to the ‘Multi-View’ window and instead of having to  navigate through all sports, you can access the ones you want from one central window.

Essentially it’s Coral’s own spin on a ‘Favourites’ tab, but it works brilliantly.

Coral offer cash out on the majority of their bets, although some events are excluded. Cashing out is simple: Next to the bet slip you will see a tab called ‘Open Bets’, where you can find all of your currently running or yet to run bets; and if a bet has a cash out option available, you’ll see a button below the bet which advises you of the amount you can cash out.

One thing worth noting is that Coral’s cash out prices aren’t usually greatest; so unless you’re looking to avoid a very tense last game sweat, it may best to avoid using this in most circumstances.

We very briefly touched on Coral’s Live-Stream earlier, but it’s such an important and popular facet of the site it deserves a special mention. As long as you have an active Coral account and have made at least one deposit, you will be able to use the live streaming feature, gaining access to a ton of events, from Football (including Spanish La Liga, Italy’s Serie A and more), to Tennis, Snooker, and even MotoGP.

The live-stream quality is good, and so long as your internet connection is reliable you should have no issues streaming the video. You can also pop-out the video player and re-position it anywhere on your screen which is pretty nifty.

Coral are probably most recognisable as a high street shop, and all together they operate a stonking 3,500 shops around England, Wales, Scotland, and Northern Ireland. 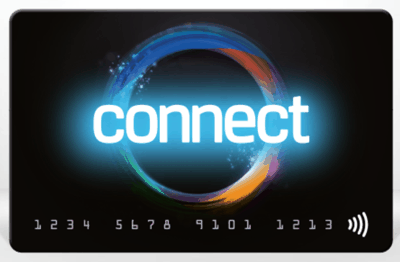 Perhaps the biggest benefit for players who enjoy both shop betting and online betting, is the Coral Connect Card; which acts similarly to a cash card, except it’s only usable at Coral, in their shops and online.

By far the biggest benefit of the card, is that if you have a win online, you can go to a Coral shop straight away and withdraw cash there and then, meaning you won’t have to wait to get your hands on your cash. Big giant tick for Coral.

Connect Card holders also get an impressive number of bonuses and matched bet offers, usually at a rate of around one per week.

As one of the largest gambling companies in the UK, Coral are well connected in the payment processor industry, and you will find virtually every payment method imaginable available to use.

All major Debit cards are accepted, alongside a number of pre-paid cards. There is also the ability to use eWallets – the most notable of which is PayPal.

Coral’s maximum payout is stated as £100,000 (for a singular bet, we’re not talking withdrawals here), and while this is in line with most of the UK’s other online Bookmakers, it does seem low when compared with Betfred, who offer as much as £500,000.

Coral are one of the oldest gambling companies in the world, first finding their feet back in the early 1920’s. While the structure and operation of the company has changed significantly, as one would expect after almost 100 years in the industry, their core values of delivering a player focused service remain true, and they remain cemented as one of the UK’s most trusted online betting sites.

Now owned by the Ladbrokes Coral Group, Coral continue to expand their operations, and despite focusing heavily on the casino side of their business, they still pioneer new technology in the Sports Betting market as well – as seen with their ‘Radio’ and ‘Multi-View’ features that we looked at earlier.

It’s not hard to see how the company has become such a trusted name in British gambling, and it’s unlikely they’re going to be going down in our estimations any time soon.